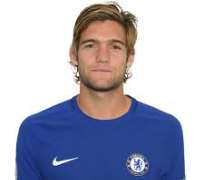 Pep Guardiola’s City travel to West Brom on Saturday with a five-point lead at the summit from Manchester United and Tottenham, having won eight and drawn one of their nine top-flight matches so far.

Chelsea are four points further back after three defeats over the same period.

Alonso believes the Blues’ return to the Champions League has taken a toll on the squad, while a run to the quarter-finals of the EFL Cup has increased their workload further.

But Antonio Conte’s side battled back from behind to secure a much-needed 4-2 win over Watford last weekend and the wing-back told Marca that morale has lifted ahead of Saturday’s trip to Bournemouth.

“This season is more complicated than the previous one,” Alonso said.

“We have four competitions and, besides, we do not have a very big squad, which makes everything more difficult.

“But winning games in the final minutes, like against Watford, will give us morale for the next games.”

Victory at the Vitality Stadium will see Chelsea gain ground on the chasing pack, with United and Spurs playing each other at Old Trafford, but it is City who Alonso has in his sights.

Kevin De Bruyne scored the only goal when Guardiola’s men turned in a dazzling display at Stamford Bridge before this month’s international break but they laboured to a penalty shoot-out win over Wolves in the EFL Cup on Tuesday and Alonso insists a drop-off in their form is inevitable at some stage.

“The season is very long,” he said. “It is true City are playing very well but they will decrease in their performance at any given time. Let’s fight until our top form joins us.

“After playing 10 [eight] games last season we won 13 in a row and I see no reason not to repeat it.”

When the decisive moments of the season arrive, Alonso feels rivals should be in no doubt that Conte will have Chelsea in prime condition to pounce.

“Conte is a hard trainer, who likes to work on the physical and tactical aspect,” he added.

“When you are training you suffer, but then you thank him in the field.

“When we were champions last season, I do not think anyone complained about how much we had to run.”