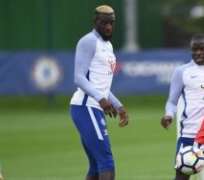 Antonio Conte  believes his work with N'Golo Kante over the last year has helped  develop the player into the complete midfielder and the Chelsea  manager expects Tiemoue Bakayoko to undergo a similar transformation over  the coming months.

Bakayoko, signed for £40 million from Monaco in July after previously  attracting the interest of Arsenal manager Arsene Wenger, is expected to  line up alongside Kante in central midfield when  Wenger's side visit  Stamford Bridge  on Sunday.

Conte claims Kante has made significant  strides under his direction ago and points to the progress made by the  former Leicester City player as evidence of what Bakayoko can achieve.

“Baka is a good player but he’s 23 years old, don’t forget this, and he has  a lot of room to improve tactically and also in the physical aspect,” said  Conte.

“Above all if you are a midfielder, you need time to understand the  right position. We try to play with an identity and if you want to give an  identity to your team, every single player needs to know very well your  idea of football.

One of the boys: Tiemoue Bakayoko larks around with David Luiz Credit: Getty

“I think he’s very close to being totally involved in our idea of football.  I think so. He can improve a lot with the ball. We are working about this  aspect.

“We want to work in the same  way to have this process with Baka. This will be better for him and for the  team.”

Sunday’s meeting comes almost exactly a year since Wenger's side inflicted a  crushing 3-0 defeat on Chelsea at the Emirates Stadium, a result Conte  acknowledges marked a low point in his career.

The Italian's future was questioned but he reacted to defeat by switching  to a back three, a move that acted as the catalyst for their title success  – and for Arsenal it’s a big mountain with only two wins in the Premier  league over other members of the top Six in the past five years.

Wenger said the closeness of the transfer deadline impacted on his team as  they went down 4-0 to Liverpool three weeks ago.

Arsenal did follow that with a convincing 3-0 victory over Bournemouth, and  Wenger said of the Anfield performance: ” it is important to think, yes it  was a bad game but it does not mean it will happen again it just means that  we learn from defeat and every team during the season goes through a bad  patch.”

After he saw his £70m move to Manchester City collapse, Alexis Sanchez  returned to scoring form in the midweek win over Cologne, and Wenger is  looking for more.

“We love Alexis. He is a special character but we love him and he is loved  and accepted and he is happy here as well.”