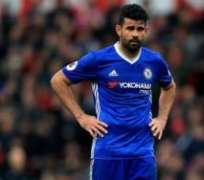 D iego Costa's Chelsea career is effectively over after Antonio Conte made it clear there will be no U-turn on the striker's future as the club battle to get a deal for midfielder Tiemoue Bakayoko over the line.

Chelsea are aiming to complete the signing of Bakayoko from Monaco this week, despite problems emerging over the £35 million transfer that the club thought they had clinched a fortnight ago.

Bakayoko's move has been held up by a knee injury after he underwent surgery at the end of last season, which has prevented him completing a medical.

Chelsea hope they will be able to complete the medical over the next few days, but Monaco have also been angered by the proposed payment schedule and the Premier League champions' refusal to pay closer to £40m for the 22-year-old.

Monaco have claimed that Chelsea's stance could allow Manchester United to hijack the Bakayoko deal, but sources have also told Telegraph Sport that Nemanja Matic still hopes to join the Old Trafford club. Costa wants to move back to his former club, Atletico Madrid Credit: Reuters

T he threat of United could be being used to try to scare Chelsea into paying more for Bakayoko or allowing Matic to join his former manager Jose Mourinho in Manchester, despite the Blues missing out on Romelu Lukaku.

C helsea are still confident they will sign Bakayoko, but their complicated attempt to do so underlines the difficult start to pre-season head coach Conte has faced.

Conte told Costa not to return for the start of pre-season training on Monday and does not plan to take him on pre-season tour to China and Singapore next week – even if a return to Atletico Madrid is not completed.

Chelsea were unaware of claims that Costa has remained on holiday in Brazil, but they were supported by a picture of the 28-year-old on a beach that was posted by his brother Jair.

C onte told Costa he was not part of his plans by text message at the end of last season and the Italian is standing by his decision, despite Chelsea's losing top target Lukaku to United.

The pair first fell out in January after Costa agitated for a big-money move to China and the player last week started saying his farewells to team-mates by telephone.

Chelsea remain in negotiations with Atletico over Costa, but also some distance apart in their valuations, with the Blues demanding nearly double the Spanish club's first £26m bid.

Talks will continue this week with the aim of reaching a swift conclusion, but Conte has no desire to reintegrate Costa back into his squad if negotiations drag on. C helsea depart for their pre-season tour of China and Singapore next Monday, and Costa is not expected to be part of the travelling squad if he is still waiting on a move to Atletico to be concluded.

A tletico cannot register players until January because of their transfer embargo, so Costa would have to train at the club without playing in official games until that point.

Chelsea will attempt to replace Costa with Alvaro Morata, who had been destined to join United before Mourinho switched targets to Lukaku.

Real Madrid value Morata, who wants to move to the Premier League at £80m, but Chelsea are likely to start the bidding for the Spaniard at £70m.

Chelsea tried to sign Morata 12 months ago and there are those inside the club who believed the 24-year-old will be a better signing than Lukaku, despite the fact the Belgian was Conte's top target. S hould Chelsea succeed in getting a deal for Bakayoko over the line, then the player could miss the start of the Premier League season because he has been unable to train fully while recovering from surgery.

But that is unlikely to stop Matic leaving and sources close to the Serb remain convinced he could still move to United, despite the Lukaku saga making such a transfer seem unlikely.

Despite wanting to leave, Matic attended the first day of pre-season training but spent the afternoon running on his own with a trainer.

C helsea's players took that as a sign that Matic will soon by leaving and it now remains to be seen whether or not he goes to United or elsewhere.

Back-up goalkeeper Willy Caballero was the only new signing present at the first day of Chelsea training, as defender Antonio Rudiger was given extra time off after representing Germany at the Confederations Cup.