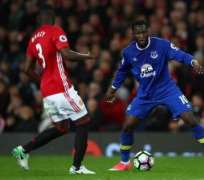 Manchester United have agreed a fee believed to be £75million for Everton striker Romelu Lukaku .

The Everton striker has made no secret of his desire to play in the Champions League and, alongside United, is considered Chelsea's top striking target this summer.

Chelsea  had been confident a deal can be reached, but the champions are not prepared to pay Everton's asking price – originally believe to beyond the current world-record £89.3m Manchester United paid Juventus for Pogba.

But the news that Lukaku could be Old Trafford bound will come as a huge blow to Antonio Conte, who has been tracking the striker since last summer.