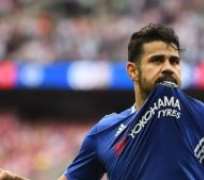 Diego Costa has Chelsea “by the balls” and is preparing to “screw” them in the transfer window, according to Eric Cantona.

The Spain international was a talismanic presence for the Blues throughout the 2016-17 campaign, with his 21-goal haul carrying the club to Premier League title glory and the FA Cup final.

He has, however, been generating exit talk since January and recently admitted that he will look to stay in Europe if a move is made over the coming weeks .

Cantona believes a big-money switch could be on the cards, having read between the lines of the excitable celebrations sparked by a 1-0 victory over West Brom which clinched Chelsea the English top-flight crown.

The Manchester United told Eurosport in his self-appointed position as 'The Commissioner of Football': “Chelsea has won the Premier League and Diego Costa found a very creative way to celebrate.

“He started with a gentle cupping of John Terry's testicles and then a sweet grind behind his trainer's derriere.

“This is a clear message for the team's bosses regarding his possible departure: I take you by the balls, and I am about to screw you as well.”

Antonio Conte has found a way of bringing the best out of Costa again, with the Spain international matching his goal haul from the 2014-15 campaign – when he also lifted the Premier League title.

He did, however, see the striker's head turned by interest from the Chinese Super League and is now facing another window in which constant speculation will continue to surround his burly frontman.