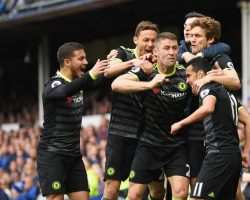 Neither side looked up for the game, until Pedro was.

This game was billed as potentially Chelsea's toughest test left as they march towards the title. With both teams struggling to produce anything on goal, the Spaniard stepped up in the 66th minute and ripped a fantastic strike past Maarten Stekelenburg and into the top-left corner to put Chelsea through at Goodison Park.

Everton was off to a flyer as 20-year-old Dominic Calvert-Lewin cut into the box and fired off a shot from a tight angle that wrong-footed Thibaut Courtois and cannoned off the post. The Blues also missed a good chance as Eden Hazard got around Maarten Stekelenburg to his right, but despite the open net to shoot at, the extremely tight angle forced Hazard into the side-netting.

That was it though, as the first 45 minutes devolved into a brutal midfield battle, with neither side truly asserting its dominance. One of the only good efforts on net for either side in the first half came in the 23rd minute as Romelu Lukaku chested down a long ball and rifled a low shot on net from a long way out, and with Courtois just off line, the ball skittered agonizingly wide.

Everton looked to foul Hazard every time he got on the ball, so Chelsea hoped to work through the middle with Diego Costa and Pedro, but they did not produce a good chance before the halftime whistle.

The second half began where the first half left off, with little in the game. Diego Costa was eventually given his customary booking for a studs-up challenge on Stekelenburg as the ball came through and the Everton goalkeeper went to boot it away.

Finally, the moment of the game arrived as Pedro cut to his left outside the top of the box and lashed a shot that scorched into the top corner and put Chelsea through.

Everton had no response, and the Blues would double the lead with 11 minutes left as a free-kick came off Romelu Lukaku and fell to Gary Cahill at point-blank range, turned in for a 2-0 lead. There was a moment of concern for Chelsea fans down the stretch as David Luiz sat on the pitch multiple times seemingly massaging his groin, replaced eventually by Nathan Ake.

It all fell apart for the Toffees, as Chelsea added a third with minutes remaining. Diego Costa released substitute Cesc Fabregas, and his cutback to fellow sub Willian near the six-yard box left the Brazilian with a clean finish.

The three points for the Blues see them seven points clear at the top of the table, while Everton remains in seventh, with no danger below them but failing to take the chance to jump Arsenal before the North London derby.