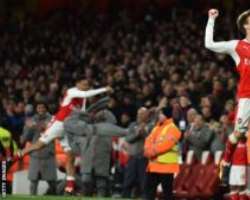 A late Robert Huth own goal was enough as Arsenal hung on to take all three points with a 1-0 win vs. Leicester at the Emirates …

1. Arsenal get lucky vs. Leicester
Arsenal snatched the three points with a hugely fortunate late goal at the Emirates at the end of a low-key, sporadically exciting, Premier League contest. Nacho Monreal pushed forward to drive a wayward shot across the penalty area, which deflected off Robert Huth and bounced home. In a game where Arsenal couldn’t create a proper clear-cut chance, something entirely random was probably their only hope of going ahead.

Last season, this fixture felt like a title decider; this time, Arsenal were desperately trying to keep their Champions League hopes alive while Leicester simply played for fun after a remarkable 18 months spent thinking about the title, then relegation, then the Champions League quarterfinals.

Indeed, there was a peculiarly subdued feel about this tie, considering it was a meeting between last season’s top two. Somewhat embarrassingly for the home team, British television was initially due to screen this fixture before a late decision was made to swap north for south London and show Crystal Palace vs. Tottenham instead.

Essentially, the viewers missed relatively little. Arsenal were the better side although none of their attackers were on top form as they struggled to turn their dominance into goals until the late drama. And while Monreal’s goal was certainly fortunate, it may yet prove decisive.

The win puts Arsenal just three points behind Manchester United and four behind Manchester City, having all played 32 games. With a Manchester derby tomorrow night and Arsenal hosting United next weekend, after a trip to Spurs on Sunday, the race for fourth suddenly feels somewhat exciting.

Nacho Monreal will take the credit though Arsenal’s winning goal was given to Leicester’s Robert Huth.

For the third consecutive game following 2-1 victories over both Middlesbrough and Manchester City, Arsene Wenger fielded a 3-4-3 system but Arsenal encountered more problems with the nature of the formation than they had in its previous two games, labouring against a deep defence that proved tough to break down.

Wenger made changes from Sunday’s FA Cup semifinal victory, with Nacho Monreal moving into the back three, Hector Bellerin and Kieran Gibbs as wing-backs, Francis Coquelin replacing Aaron Ramsey and Theo Walcott coming in for Olivier Giroud. And while the balance of the side has felt natural in the previous two games, here Arsenal’s system felt overwhelmingly defensive. Wenger was effectively using five defenders in combination with two holding midfielders, which meant that the front three were often somewhat detached from the rest of the side.

The Gunners started sluggishly, not helped by a sparse Emirates Stadium on an unreasonably cold night in north London. The passing tempo was poor, Mesut Ozil struggled to find space between the lines and Leicester played too deep for Walcott or Alexis Sanchez to find space in behind. For the first time, Arsenal felt uncomfortable in this 3-4-3. As Leicester sat back, Arsenal’s most notable attempts at goal were from long range courtesy of Coquelin and Granit Xhaka.

As the half continued, Arsenal played some better stuff. Walcott, who started on the right of the front three but would soon move up front, skipped through the Leicester defence in his usual inside-right position and stabbed a shot at Kasper Schmeichel, while Sanchez was moved to the left and went closest to scoring, thumping the crossbar from outside the box on the stroke of halftime.

Sanchez also threatened at the start of the second half when Bellerin’s storming run put him through on goal, but a timely last-ditch challenge from Robert Huth denied him. More long-range efforts came, most notably from Xhaka, whose deflected effort bounced up awkwardly but was pawed around the post by Schmeichel. Sanchez had another half-hearted effort and Laurent Koscielny didn’t make firm enough contact when going forward for a corner.

Wenger waited until the 68th minute to introduce his first substitute, with Danny Welbeck entering in place of Gibbs. This meant Arsenal switched to a back four although the shift was only confirmed after Nacho Monreal spent a minute frantically gesturing to the bench before eventually running over to discuss the situation with Wenger, who confirmed his suspicions. It’s always baffling that these things aren’t pre-planned, that the substitute doesn’t pass on his manager’s instructions, and that in a sport now obsessed with tactical preparation, there is any room for confusion.

Welbeck played on the left and provided a spark, side-footing across the box and then narrowly failing to meet a corner from the left. Five minutes later, Wenger introduced Ramsey and Olivier Giroud for Coquelin and Walcott. More midfield energy, more penalty box presence.

Leicester and Arsenal battled gamely but neither side fashioned many clear-cut chances.

3. Leicester valiant but limited in defeat
Wednesday night felt like a Leicester performance from last season: solid, hard to break down, and reliant upon Riyad Mahrez for attacking inspiration. Craig Shakepseare has revitalised Leicester City since taking over from Claudio Ranieri in February, in part by consistently deploying the system the Foxes used on their way to the title last year.

Leicester remained very narrow and extremely compact, with Christian Fuchs the defensive leader ensuring the back line positioned themselves correctly and Danny Drinkwater organising the midfield. Marc Albrighton acted like a wing-back at times to track Bellerin and while Mahrez was slower at getting back into position behind the ball, he justified this freedom with his attacking dynamism. Jamie Vardy and Leo Ulloa dropped back into midfield but had little service whenever the hosts turned the ball over.

Mahrez was the dangerman. Twice he threatened in the first half, once in the aftermath of a set-piece situation when his instinctive effort was turned over smartly by Petr Cech, then again when he slalomed through a couple of challenges on the left and poked a shot into the side netting. Perhaps the Algerian, linked heavily with Arsenal last year, was trying to remind the opposition of his qualities.

Leicester offered little immediately after half-time but improved with 20 minutes remaining. Vardy sped down the left on a counter-attack without managing to find space for a shot, and shortly afterwards, he hit an off-balance shot at Cech after good work from substitute Shinji Okazaki. The Japan international also threatened, with Gabriel making a good covering tackle as centre-back partner Koscielny rolled around in pain with a knee injury. The Arsenal captain was thankfully able to recover: Arsenal had made all three subs.

But this performance was mainly about Leicester’s defending. Yohan Benalouane, an old-fashioned brute of a defender, wasn’t penalised for clattering into the back of Sanchez but then was fortunate to escape with a yellow card when using Giroud’s back as a ladder to get up for a header.

Leicester attempted a valiant late comeback and stoppage time was dominated by a bizarre row after Fuchs hammered a throw-in straight into the shoulder of Sanchez — the Chile international had been attempting to block a long throw — which prompted a huge squabble and peculiarly ended with Sanchez being booked. Then followed an almighty goalmouth scramble in Arsenal’s box, then the referee pausing the game to remove some missions that had been thrown onto the one part of the pitch that no players had wandered into for some time and eventually, a full-time whistle.