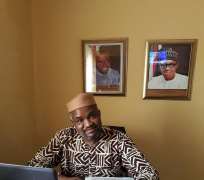 I ran into an important information fortuitously this morning about the Universal Declarations of Human Rights which was adopted by the United Nations Organization on December 10th 1948.

A friend called to congratulate me for being nominated as Africa’s distinguished personality honor awardee of 2017 by the Trans-Africa Students’ Initiative.

As we were in serious conversation on the award, he hinted me that since my nomination was because of my outstanding activities in the Human Rights community, I must be conversant with how the about 30 articles embodied in the Universal Declaration of Human Rights were authored.

Honestly, I have worked at the highest level of human rights advocacy as a Federal Commissioner in the Nigeria's National Human Rights Commission but I cannot boast of knowing from where and who authored those beautiful articles that make up the Universal Declaration of Human Rights.

This friend of mine who read French in the university then told me that the articles were first written in French and in the French capital Paris.

This small revelation brings us to the topic of my analysis today which is on the ongoing general elections in France and its neighboring country Britain. Both nations have rich backgrounds on democracy.

We will analyze these elections because of how closely related Nigeria is to both the British and French governments.

In the contemporary times, France and Britain are known to be playing active roles in helping to wage the ongoing Counter-terror war against boko haram terrorists who have attacked Nigeria, Niger and Cameroon since four years now.

Both foreign powers have contributed immensely to the setting up of the West African Counter-terror joint military task force which has its headquarters in Chadian Republic.

The British government is also known to have provided training assistance to Nigeria’s military on counter insurgency warfare.

On its part, France has played host to several top level global summits on boko haram in which President Muhammadu Buhari participated in person in the French capital of Paris.

So the elections in France and Great Britain which are some of the World’s most respected democracies will inevitably affect Nigeria and Nigerians because of the strategic issues that are at the core of the campaigns by the candidates in both elections.

One of the critical issues is on immigration and it is a notorious fact that Nigerians are amongst the largest numbers of migrants who are fleeing due to insecurity of lives and property in our country. A large parts of Nigeria have witnessed horrendous violence by diverse armed non-state actors and the conventional Nigeria military appears either too weak to defeat these private armed hoodlums or in most cases are alleged to have compromised.

Armed Fulani terrorists and boko Haram terrorists are two of the deadliest attackers who have created so much insecurity in parts of Nigeria to an extent that displaced citizens are fleeing in their droves and Libya seems to be the major point of attraction as a way to escape for refuge into the Western European communities.

In both Britain and France, there is an ongoing conversation on how to introduce strategic measures to curtail the influx of migrants from the West Coast of Sub-Saharan Africa to these first world countries in Europe through the Mediterranean Sea off the Coast of lawless Libya.

The British are also in the process of beginning the implementation of their voluntary exit out of the European Union and the focal point of the campaigns of the leading parties such as the Conservatives, Labour, and Liberal Democrats is on reduction of migration.

In fact, the British Premier who announced June 8th 2017 as the date for a snap election said she did that so as to get better support for a successful Brexit.

Theresa May said she wants to hold a snap general election on 8 June, despite repeatedly claiming that she was against the idea of an early vote.

In a surprise statement outside Downing Street, The Guardian of Britain reports that, the prime minister claimed that opposition parties were jeopardizing her government’s preparations for Brexit.

“We need a general election and we need one now,” she said. “I have only recently and reluctantly come to this conclusion but now I have concluded it is the only way to guarantee certainty for the years ahead.”

In her statement, May said her government was trying to deliver on last year’s referendum result by making sure Britain regained control and struck new trade deals.

“After the country voted to leave the EU, Britain needed certainty, stability and strong leadership.

Since I became prime minister the government has delivered precisely that,” she said, but claimed that other political parties had opposed her efforts.

The Guardian also reported Jeremy Corbyn, the leader of the Labour party, as stating that he welcomed the decision, suggesting his MPs would back the Commons motion.

“I welcome the prime minister’s decision to give the British people the chance to vote for a government that will put the interests of the majority first.

Labour will be offering the country an effective alternative to a government that has failed to rebuild the economy, delivered falling living standards and damaging cuts to our schools and NHS.

“In the last couple of weeks, Labour has set out policies that offer a clear and credible choice for the country. We look forward to showing how Labour will stand up for the people of Britain.”

Currently, the Conservatives have 330 MPs, giving the party its working majority of 17. Labour has 229, the SNP 54, and the Lib Dems 8. Minor parties and independents hold the remaining seats, in a 650 strong Commons.

Keir Starmer, the shadow Brexit secretary, said that the country was more divided than it ever had been during his lifetime. “That represents a complete failure by Theresa May to bring the country together behind a bold and confident future for Britain outside the EU,” he said.

The Lib Dem leader, Tim Farron, was reported as saying thus: “This election is your chance to change the direction of our country. If you want to avoid a disastrous hard Brexit, if you want to keep Britain in the single market, if you want a Britain that is open, tolerant and united, this is your chance. Only the Liberal Democrats can prevent a Conservative majority."

In France the two leading candidates for the Second round of the Presidential election have been elected during the First round of the election held on Sunday April 23rd 2017.

They are Emmanuel Macron and Miss Marine Le Pen.
Emmanuel Macron, an independent Candidate who formed his party only a year ago is known to have a liberal position on immigration.

Al Jazeera reports that, unlike several of his opponents on the left and right, Macron has avoided making pronouncements against Muslim dress codes and is a fierce defender of an open immigration system.

In February, he condemned France's colonial legacy in Algeria as a "crime against humanity", earning rebukes from many on the right.

Nevertheless, Macron stood firm, apologizing only for the offence caused and not for the actual comment itself.

As an economic liberal, he has fiscal policies that differ little from the economic consensus built in the decade since the global crash that started in 2007.

On her part Marine Le Pen is a fierce campaigner for France to quit European Union. Aljazeera reported that in March she emerged from a meeting with the Russian President Vladimir Putin in Moscow to deliver a proclamation to the reporter's gathered: "A new world has emerged."

The leader of France's far-right National Front (FN) party hopes that she will be a leading figure in this radical reordering of the global elite, which already counts the election of US President Donald Trump and the British vote to leave the EU among its successes.

Once considered an unrealistic prospect, Le Pen would cause shockwaves just as large as Brexit or the Trump victory if she were successful in the upcoming presidential vote in few weeks’ time.

As stated earlier, these elections will directly shape some happenings in Nigeria. Nigeria enjoys buoyant trade volumes between us and these two nations and so the administrations that would emerged from the elections would be expected to consolidate on these healthy economic ties but it all depends on how Nigeria organizes herself. For instance as far back as April 2016, Mr. Nick Hurd the British minister for International development was quoted in the press as stating that the trade volume between Nigeria and United kingdom was estimated to be within the region of £6 billion British Pounds or #2.4 Trillion Nigeria Naira in the year 2015. Then in July 2015 the French Ambassador to Nigeria Mr. Denys Guur was quoted as saying that the trade volume between Nigeria and France had reached #1.1 Trillion Nigeria Naira.

So give and take which ever political parties that produces the winners of these key elections deep inside Europe would surely be expected by Nigerians to deepen our trade and economic relationship with the hope that the economy of Nigeria can be revived if there exists fair and balanced trades.

Another issue Nigerians would hopefully look for solutions is the insecurity situation. Nigerians would look up to the administrations that would emerge in those countries to further scale up the bilateral agreements on the global counter terror war because of the obvious fact that insecurity is the number one cause of huge influx of migrants out of Nigeria to Europe. If the twin evils of insecurity and economic recession are to be resolved quickly then the issue of irregular migration of Nigerians into Europe would be a thing of the past. France and Britain would also be expected to look at the poor respect for human rights of Nigerians by the government.

Disclaimer: "The views/contents expressed in this article are the sole responsibility of Emmanuel Onwubiko and do not necessarily reflect those of The Nigerian Voice. The Nigerian Voice will not be responsible or liable for any inaccurate or incorrect statements contained in this article."
Articles by Emmanuel Onwubiko
9-8-2017  My Journey To Would Be Star University In Idimuje-ubgoko11-5-2017  South East And Voter’s Registration9-5-2017  Macron: Lessons For Nigeria 2-5-2017  Sanitizing Nigeria's Political Campaigns21-4-2017  As Eze Goes To South SudanMore...