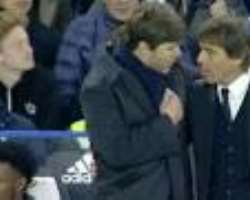 Chelsea beat Spurs4-2  in Wembley epic
The Tottenham players all clapped their fans at the conclusion at Wembley as Chelsea's supporters danced to Madness's ‘One Step Beyond’ at the other end. There is one step that remains beyond Spurs; to deliver on their potential and win a trophy with their best coach and best squad of the modern era.

“I cannot change the past,” said Mauricio Pochettino. “You need to deal with today – the present – to have a better future. I know that if you’re a supporter you feel very disappointed today. You always want to win. But with the project and in the moment that we are in I feel very proud. They players are making a fantastic effort. I believe this is an exciting team and it is only a matter of time until we win.”

There will be talk that Chelsea's goals to peg Spurs back came “against the run of play” but that's the point. Champion teams are able to withstand pressure when opposing sides are in the ascendency. Spurs had more of the ball and more shots but that counts for very little when Chelsea put four of their five attempts on target into the back of the net.

Spurs couldn't make Chelsea crack. Without Gary Cahill in the defence Antonio Conte's league leaders looked a little off. Diego Costa and Eden Hazard were benched and so Spurs's task of clearing this massive psychological hurdle appeared as clear as it could be.

They forced Chelsea onto the back foot well enough but could neither put their opponents away nor guard against sucker punches.

When a manager makes a decision like Mauricio Pochettino made here he hopes and prays it won't backfire. Heung-min Son has never been and will never be a competent left wing-back, but was nonetheless named there in the Tottenham starting XI.

The plan was to force Victor Moses into reverse, thereby neutralising one of Chelsea's foremost attacking outlets. It did not work.

As the clock ticked towards half time it was Son who fouled Moses inside the Spurs area and gifting the Premier League leaders the chance to restore the lead from the penalty spot. Willian duly obliged with his second goal of the first half. Chelsea had a half-time lead they scarcely deserved and Spurs were forced into a rethink.

The Spurs fans had the sun in their eyes behind Thibaut Courtois' goal as the north London sun began to set. At 2-2 it looked like they would be the ones celebrating come the conclusion. They were the better team by that stage.

The mesmeric Christian Eriksen delivered a quarter-back-worthy assist for Dele Alli in a goal that could only have been bettered by Nemanja Matic's one late on. The momentum – at that stage – was with them but Chelsea endured. They endured long enough to give Hazard – a player of pure class – the chance to do what they couldn't and edge his team in front.

That is what is separating Tottenham with champion teams at the moment; the ability to hang tough.

There is little doubt that Mauricio Pochettino's team are the best football team in Britain but that counts for nothing right now. It counts for nothing with fans are trudging out of Wembley before the final whistle after losing 4-2 to a side they controlled for large parts of the game. The sight of London rivals celebrating jubilantly was simply too much for some of them to bear.

They had watched Chelsea go up a gear with Hazard and Diego Costa coming on; Hazard's goal to make it 3-2 was a dagger in the heart; a crushing reminder of their status.

Despite the promise, despite the high-quality players and clear-headed pathway for the future, they are still Spurs to their very core. When the pressure is on and titles are to be decided they remain brittle, tentative and too meek to pursue success.

Only one thing will change it. Winning titles. Spurs can have all the good players they want – and a new stadium to boot – but the next step is trophies.

This one is gone so that leaves only the Premier League title. Chelsea have wobbled in recent weeks – allowing a 10-point league slip away to a four-point one. Spurs have got to keep the foot to the floor and push them as close as they can come the end of the season.

Eriksen is Europe’s assist king
There are an awful lot of good players at Spurs – Harry Kane, Dele, Mousa Dembele, who was the best player on the field at Wembley – but someday their career might flash by and they'll realise they have nothing to show for it.

“To fight on that level with Chelsea, one of the best teams in England, is a big thing for us,” said Pochettino. “Two years ago it was difficult to think of us being at that level – the semi-finals of the FA Cup and fighting for the Premier League. Now it is a reality.

“We have to be careful how we build the team over the next two years. It was not today, this season, but we will try again next season for sure.”

Pochettino has to make sure that his players don't grow disillusioned and seek success elsewhere. They only way to do that is take the next big step and win something, anything substantial.