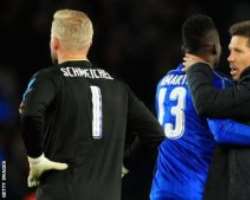 Atletico Madrid coach Diego Simeone knows fighters when he sees them – so the warm embraces he offered Leicester City’s players at the end of his side’s hard-fought Champions League victory spoke of respect fully earned.

Leicester spent everything on and off the pitch to write one more chapter in the remarkable story of their past 12 months – but the dream died at the hands of a mix of excellence and experience that is La Liga powerhouse Atletico.

The King Power Stadium dripped with atmosphere and reverberated to a wall of sound before kick-off amid scenes more reminiscent of a rock concert than a Champions League quarter-final second leg.

Dry ice dropped from the rafters of all four stands, a giant banner displaying the face of a fox rolled down behind the goal and a spectacular display of pyrotechnics and fireworks lit up the night sky at one end of the stadium.

And as more dry ice greeted the name of every Leicester City player as they were announced, Simeone stood unmoved and unimpressed in his technical area – a brooding presence, a mixture of menace and authority in his trademark black overcoat, suit and shoes.

His team followed suit by swiftly illustrating that this was to be a step too far for a Leicester City team who not only defied odds to win the Premier League last season but continued to laugh in the face of logic by becoming England’s last representatives in the Champions League.

It was noisy. It was brave. It was occasionally chaotic. And in the end it was not quite enough.

So this Leicester journey comes to a close – but not without the pride, passion and sheer bloody-mindedness that has been a characteristic of their Champions League campaign.

Reality dictates that it may be a long time before the King Power plays host to Champions League football again. If it is, this was a match and occasion that contained so many of the attributes that has made Leicester’s run to the last eight so memorable and so creditable.

Leicester were almost regarded as gatecrashers at Europe’s elite football party following their remarkable title win, but they have made themselves right at home and have never looked out of place among such illustrious company.

When others spoke of group stage respectability, Leicester – initially under the guidance of title-winning manager Claudio Ranieri – made a nonsense of their domestic struggles to breeze through Group G, with memorable moments such as the 3-0 win away to Club Brugge.

The 5-0 loss away to FC Porto in their final group game was an aberration as they topped their section. They then set up the drama and sub-plots that surrounded their last-16 tie with European specialists Sevilla, Europa League winners for the past three seasons and riding high in La Liga.

Ranieri was sacked, brutally in the eyes of some, after Sevilla’s 2-1 win in the first leg on 22 February – then, on a night of drama, his replacement Craig Shakespeare masterminded a 2-0 win in the second leg.

Atletico, genuine Champions League A-listers, carried just too much over two legs, but even then they required a dubious first leg penalty from Antoine Griezmann, who was fouled outside the area by Marc Albrighton, to secure the lead they protected here and added to with Saul Niguez’s header.

Leicester City could have been forgiven for accepting the game was up as they needed three goals, but this is not a team or an arena built to go quietly, and how it rocked when Jamie Vardy’s equaliser on the night offered brief hope that another sporting miracle might descend on the King Power.

Atletico are drilled in the sort of backs-to-the-wall defiance they required for the last 20 minutes, and it is a tribute to Leicester that they tested a team of such steel and discipline, a mirror image of the streetfighter and super-talented coach who leads them, to such an extent.

Leicester ran until the final seconds of four minutes of stoppage time. A crowd fed on fantasy for the past 12 months roared in anticipation at every attack until the dying moments as if they fully expected their players to set reality aside once more and do the seemingly impossible again.

This time there was no fairytale. Reality did kick in and hit home when Italian referee Gianluca Rocchi sounded the final whistle to signal the end of Leicester City’s European adventure.

Leicester’s players slumped to the ground in despair before rising to hear the sound of a standing ovation from all corners of the King Power, appreciation not just for this night but for the others they have given their supporters on this journey into the unknown.

Shakespeare spoke of wanting more of this, hoping his players have got the taste for more as they go back to league business at Arsenal next Wednesday night.

Leicester were damned with faint praise when they reached the Champions League. The knockout phase would supposedly be glorious success – that goal was achieved and more as they were edged out of a place in the last four after the Premier League’s other contenders fell by the wayside.

The dream is over but the ride was full of the twists and turns that have played out on all the pages of this unlikely Leicester City story.

The Foxes ended as Champions League losers – but they can leave Europe’s top table with reputation enhanced and heads held high.