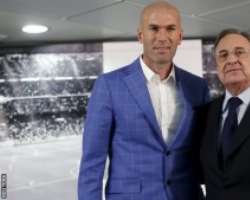 Real Madrid will attempt to use James Rodríguez as bait to lure Eden Hazard from Chelsea this summer, according to reports.

Hazard, the Belgian forward , has been one of the most outstanding players for Antonio Conte's Chelsea this season, helping guide the club to a 10-point lead at the top of the Premier League.

But, according to Spanish newspaper Marca , the London club will struggle to keep hold of Hazard this summer as Real Madrid is keen to bring the 26-year-old to the Santiago Bernabéu.

Eden Hazard at London Stadium, Stratford, March 6. Hazard has been one of Chelsea’s outstanding players this season. Julian Finney/Getty

Real is believed to have made an attempt to sign Hazard last year and Chelsea refused to sell, but promised to listen to offers should the Spanish club return.

Zinedine Zidane, now manager of the Madrid club, is said to be a keen admirer of the skillful forward , which has reignited Real's interest.

Marca also claims that Real will attempt to use Colombian forward Rodríguez as part of the deal, a player Chelsea has previously shown interest in.

Hazard is expected to be part of the Chelsea team that hosts Crystal Palace at Stamford Bridge on Saturday, as Conte's side looks to extend its lead at the top of the table.