I would love to have kelechi Iheanacho at Arsenal: Alex Iwobi 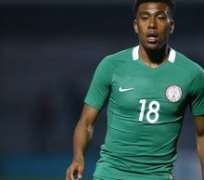 Arsenal forward, Alex Iwobi, has said he could influence a move for his international team-mate Kelechi Iheanacho, from Manchester City to the Emirates.

Iwobi however said although he wants the Gunners to go for the “funniest guy I know”, he is not sure a deal can happen soon.

“I tell you, you should see us [him and Iheanacho] on Snapchat! Always bantering,” Iwobi said.

“We're roommates right now and he's just the funniest guy I know. 'We do get on well off the pitch as well as on the pitch.

“Maybe I can try to convince Arsenal to sign him – but I don't think that's going to happen.”

Iwobi shocked football fans, after a video of him speaking fluent Pidgin English was posted on Twitter by another team-mate Ogenyi Onazi.

The 20-year-old who grew up mostly in the UK, explained how he learned the language.

“Everyone could speak English, I'd get along fine, but they'd all say, “come on, you need to learn your language”. So yeah, I've learned a bit, which helps.

“When I first went I felt like I'm an alien! I know they used to take the mick out of me, and I didn't know what they were saying. But now I can understand!”