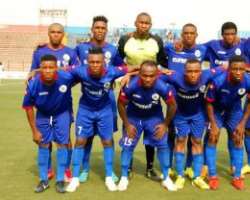 After 3-0 win at home a week ago, Rivers United were confident of advancing to the next stage of CAF Champions League.

They imagined the huge task of their opponents cancelling out their three goals advantage in Sundan.

But like a dream the reality dawned on them on Saturday: They are  out of CAF Champions League after losing 0-4 to Al-Merrikh of Sudan.

Al Merreikh of Sudan overturned a 3-0 deficit to advance in the competition 4-3 on aggregate after winning 4-0 in Sudan.

Al Merreikh have thus qualified for the money-spinning group stage of the Champions League, while Rivers United will slug it out for a place in the group phase of the second-tier CAF Confederation Cup.

The Sudanese giants raced to a 3-0 first-half lead courtesy of a hat-trick by Bakri Al Medina.

They then ensured the game did not drag into a penalty shootout by scoring a fourth goal after the interval.

Rivers United 's Bolaji Simone had revealed that they were greeted by hostile Al-Merrikh supporters ahead of their Caf Champions League encounter.

The Pride of Rivers won the first leg of the Round of 32 tie 3-0 at the Yakubu Gowon Stadium.

With the exit of Rivers United, Rangers remain the only club from Nigeria in championship and they will play Zamalek of Egypt in Enugu on Sunday.