Dortmund relieved to avoid Bayern but wary of dangerous Monaco 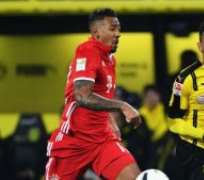 Borussia Dortmund CEO Hans-Joachim Watzke was pleased to avoid an all-Bundesliga clash against Bayern Munich in the quarter-finals of the Champions League after Thomas Tuchel’s side were drawn against Monaco.

Dortmund overturned a 1-0 first-leg deficit in their last-16 meeting with Benfica, romping to a 4-0 success back on home soil thanks largely to Pierre Emerick-Aubameyang’s hat-trick.

And Aubameyang will go up against one of his old clubs in the last eight after Monaco prevailed on away goals in a thrilling tie with Manchester City that ended 6-6 on aggregate.

While Watzke was relieved to miss domestic rivals Bayern in the quarter-finals, he preached caution regarding the prospect of facing the free-scoring Ligue 1 leaders, with Dortmund to host the opening leg next month.

“I saw Monaco’s match against Manchester City and I am aware that they have a goal difference of +58 in the league.

“It’s a difficult match. At this level, it doesn’t really matter if you play at home first.”