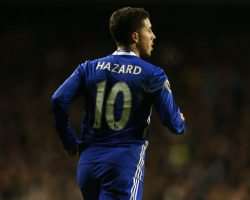 Chelsea star Eden Hazard is back on Real Madrid radar.

Reports indicate that the Spanish giant is readying a bid for  Hazard – if they sell James Rodriguez and Isco .

The Madrid duo have been heavily linked with moves away from the Spanish capital this summer as they cannot hold down a spot in Zinedine Zidane’s first team.

Isco is reportedly a target for Juventus and Tottenham, while Rodriguez has recently been linked with a return to French side Monaco .

According to Spanish radio station COPE, if Real Madrid do sell the midfield pair they will then launch a bid for Hazard with the cash they bank.

The Belgian has been back to his best this season, scoring 11 league goals for the Premier League leaders.