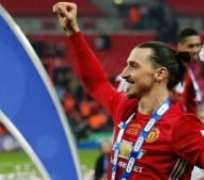 The 35-year-old – who now has 26 goals in all competitions this season – had earlier put United in front, before Jesse Lingard doubled their lead.

But Manolo Gabbiadini’s brace ensured an impressive Southampton made United work until the end, with Mourinho conceding United did not deserve to win in 90 minutes while praising Ibrahimovic’s exploits.

“Zlatan won the game for us, he was outstanding,” Mourinho said to Sky Sports.

“There were a couple of performances like Pogba who was at a similar level but Zlatan was outstanding in a match where our opponent was better than us for large periods of the game.

“Southampton deserved to go to extra-time, they didn’t deserve to lose in 90 minutes, but he made the difference and won us the cup.”

United still have the chance to win a treble of cup competitions, as they remain in the FA Cup and Europa League, with Mourinho – now a four-time EFL Cup winner – feeling the victory could be crucial in his team’s progression.

“This is the first one plus the Charity Shield,” said the United manager. “For the development of the team there is nothing better than doing it with a feeling of trophies.

“We now have Bournemouth in the Premier League, Rostov in the Europa league, Chelsea in the FA Cup – so much to play for.

“I could feel the difference in freshness between one team and the other. We would have been in trouble had it gone to extra time. I had to make the team compact because the fuel was in their legs and not in ours.”