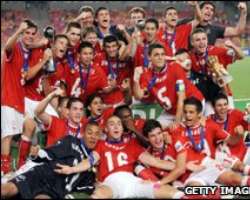 Age testing took place at the Under-17 World Cup, won by Switzerland

Nigerian footballers and athletes involved in age-group competitions are to be tested to determine their age.

Now the country's sports minister says MRI tests must be carried out make sure no-one is over age.

“All athletes representing Nigeria at any youth tournament [must] undergo the MRI bone scan tests,” a government spokesman told the BBC.

“Any association or federation that [fails to impose] this new directive will be severely sanctioned.”

“It is not just football that has suffered from these accusations but other sports as well – Nigerians are honest people and we should prove that.”

Football's world governing body Fifa introduced MRI scans to check the ages of players at the recent Under-17 World Cup, which took place in Nigeria.

But they have not implemented the tests at Under-20 level because the results are less easily interpreted at that age.

Nigeria have won the Fifa Under-17 World Cup three times – 1985, 1993 and 2007 – but there have been frequent questions over the ages of some of the players representing the country.

Meanwhile, more than US$4.6 million will be paid to Nigeria's World Cup team if they reach the final of the tournament.

Players could earn up to US$138,000 each in allowances, appearance fees and win bonuses should they go all the way in South Africa, according to the country's football federation.

Nigeria face Argentina, South Korea and Greece in Group B in South Africa.