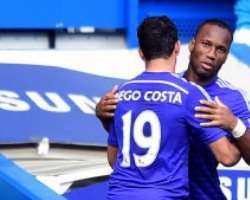 Chelsea have reportedly agreed a deal to make Diego Costa their highest paid player and fend off interest from the Chinese Super League.

The Blues have put a five-year contract worth £220,000 a week plus bonuses on the table for Costa amid speculation he could quit the club this summer.

Chinese club Tianjin Quanjin made an approach for the Spanish international in January but The Sun claims he has now committed his future to the west Londoners.

Conte said: “Is everything calm now? Yes. Diego is a really important player.

“I see him every day and I see his commitment, his behaviour is very involved in the team. He loves this club.”

The deal for Costa, which the report claims has been agreed in principle, would see him overtake Cesc Fabregas to become the top earner at Stamford Bridge.