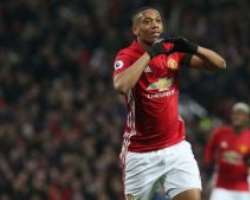 Still Manchester United wait to climb into the Premier League’s top four, but at least Saturday’s 2-0 victory over Watford was collected with relative ease. Anthony Martial scored a goal and supplied an assist to be their match-winner. The Frenchman, lately a peripheral figure in Jose Mourinho’s reckoning, issued a timely reminder to the manager of his undoubted talents.

All United can do is keep the pressure on and hope their rivals lose their footing. They have been outside the Champions League positions for five long months, seemingly stuck in sixth despite going unbeaten for 16 league matches. Arsenal’s earlier 2-0 defeat of Hull had closed off the chance of creeping into the top four this weekend.

United purred at times here and especially in the first half, when Henrikh Mkhitaryan, Juan Mata and Paul Pogba delighted with a collection of flicks and tricks. This was direct, attacking football played at pace and with none of the over-deliberation of the Louis van Gaal era.

During a first-half sequence in which Martial, Zlatan Ibrahimovic, Mkhitaryan and Ander Herrera missed good chances and Pogba had a shot saved by Watford keeper Heurelho Gomes, it briefly seemed as if United might add to their costly total of nine draws. But Watford’s resistance did not last. Martial, surging on to Mkhitaryan’s pass, was allowed to lay the ball into the path of Juan Mata. Six yards out, he could hardly miss, despite a bobbling deflection as it came to him.

It was a thoroughly deserved lead for United but a fragile one, with a poor yield from the 14 shots rained on Watford’s goal in the first 45 minutes. United playing well and not collecting three points has been Mourinho’s mantra this season, and the second half began with something of an anxious lull.

This time, fears of the same old story repeating would not be realised, as on 60 minutes, Martial, who had already missed an early second-half chance, carved into Watford’s 6-yard box before placing his shot into the bottom corner, beyond the reach of Gomes.

Juan Mata netted the opener as Manchester United strolled to victory over Watford to keep their unbeaten run going.

Martial the man for Mourinho
Martial was back on the left flank over Marcus Rashford. He showed plenty of flashes of the brilliance, of which he is fully capable, though also some hints of a lack of confidence. A first half fresh-air shot had Old Trafford gasping in agony, and coming off the flank on to his right foot, he initially looked a little predictable for former United trainee Craig Cathcart on the left side of Watford’s defence.

While Mata and Mkhitaryan buzzed around, Martial was pegged to his flank, yet United were glad of an old-fashioned winger’s contribution for Mata’s opener. After Martial’s ball from the byline, Mata made a point of celebrating with his supplier.

Martial thereafter played with far greater confidence and blazed away from Cathcart to screw his shot wide in the opening seconds of the second half.

And it was Martial who would cool nerves down. His goal, in which he cut inside and kept calm to score, was reminiscent of the strikes that made his reputation last season at United. A player in whom Mourinho has expressed public doubt had proved his point and left the field in the 81st minute to a standing ovation. Mourinho offered what looked like sincere appreciation as the man of the match made his way to the bench. Anthony Martial was man of the match with a goal and assist in the 2-0 victory

Spirited Watford fall short
The last time Watford won at Old Trafford was 1979, under the management of the late Graham Taylor in a League Cup tie. They arrived in good form. A team previously looking in danger of being pushed into the relegation battle had won their previous two matches, the 2-1 wins over both Arsenal and Burnley hauling them to the comfort of 10th in the table.

Perhaps a sense of safety gave them freedom. They did not sit back in the style of a team scrabbling for life. Jose Holebas made a series of darts into the heart of United’s midfield and blazed a fizzing shot that had David De Gea beaten in the 18th minute. Soon after that, Mauro Zarate’s overheard attempt had to be stopped by United’s keeper.

M’Baye Niang, on loan from AC Milan and a scorer last week against Burnley, was also given a couple of sighters. Pogba and Herrera in midfield allowed Watford plenty of space. That said, both midfielders contributed heavily to United’s devastating sequence of chance creation from which Mata eventually scored.

To Watford’s credit, their spirit remained unbowed. They clamoured for a first-half penalty when Chris Smalling impeded Etienne Capoue. Referee Bobby Madley waved that away but did award the 55th-minute free kick from which Zarate’s dipping, swerving effort asked the very best from De Gea.

Ultimately, though, Watford did not have enough quality in defence to deal with United’s attackers. The long wait for a win at Old Trafford continues, but they will be back next year.