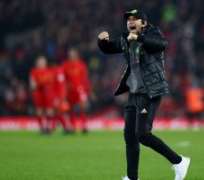 It's perhaps a testament to just how well the season's gone that a 1-1 draw at Anfield feels at least partly as a tremendous disappointment. Of course, Diego Costa's missed penalty adds palpably to that feeling, though we should be reminded of Roberto Firmino's missed sitter at the other end. On the balance of things, a draw is something that we should be happy with, even if it does not feel like that right away.

“I am pleased with the performance of my players. It's not an easy moment to play Liverpool after three defeats. It's not easy to play in this atmosphere at Anfield too and for this reason I am proud of my players for the personality they showed me tonight.”

“This game was incredible, very tough, great intensity, a lot of pressure from both sides, and for this reason there were a lot of mistakes. When there are these type of games with high intensity it's very difficult to see the mistakes and to try to make the correction, but I think we played a really good game. It wasn't easy to play with the same intensity as Liverpool, and to also have different chances to win the game. We must be pleased.”

“It's a good point for sure. When you have a great chance, a penalty on 76 minutes, for sure you think you could win and take three points. Diego kicked very well and Mignolet made a great save. Also, after this situation, we had two chances to score the second goal but it didn't happen.”

“Now it's important to recover very well because we used a lot of energy.”

Conte will have plenty of mistakes to review and work on at the training ground in the coming days. Chelsea at times looked incapable of stringing more than a couple passes together, affecting our ability to play out from the back and run consistently effective counters, and while we looked comfortable enough in the first-half letting Liverpool run the game, for much of the second half, it was a more desperate and disorganized defensive effort from the Blues. Chelsea didn't quite settle down until Fàbregas was introduced in the final ten minutes — a move that almost paid dividends despite the limited time available to Cesc to make a difference — and needed a nearly superhuman effort from Kanté to get that far in the first place.

That said, Chelsea had a fair share of great moments as well, with stellar performances in general coming from the likes of David Luiz and Nemanja Matić, who combined with Kanté to mark Coutinho and Lallana out of the match. We'll need similarly strong efforts from that trio to shut down Arsenal's biggest threats this coming weekend.

“For sure we face another great team, because Arsenal can fight for the title. Don't forget in the previous game we lost 3-0 away. This could be a good chance for us to show that now we are a totally different team if you compare to the previous game.”

“It will be another tough game, but we play at home, and this is very important. This week is very important for us, and we want to finish this week in the right way by preparing very well for this Arsenal game.”

-Antonio Conte; source: Chelsea FC
Regardless of what happens on Sunday, Chelsea are guaranteed to emerge form this tough two-game stretch with at least a six-point lead at the top of the Premier League table. We will of course be expecting a win against Arsenal at home, partly to make up for the season's worst effort in the 3-0 loss away at the Emirates, but next six games after this weekend are against teams 9th or lower, which should bode well for wrapping up our second title in three years with matches to spare.