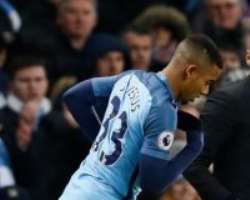 Pep Guardiola has identified Leroy Sané, Gabriel Jesus and Raheem Sterling as Manchester City's exciting young forward line of the future but warned all of them they must deliver now.

Sterling was at the club when Guardiola took over in the summer, while Sané and Jesus are his signings. Sterling is 22, Sané 21, Jesus 19 and Guardiola is excited by their youth and potential.

“These three players will be the future in the next three or four years, I'm pretty sure of that,” the manager said. “The last game [the FA Cup win at Crystal Palace] we played with three guys with an average age of 20. I don't think in the big clubs in Europe you can find three strikers with an average age of 20. But we have to win the games today. People aren't expecting what's going to happen in three or four years but it's good with this huge talent of Raz, Gabriel, Leroy who are so young.

“Raz is playing in a row every three days at a high level, has scored a lot of goals, made assists, and is dangerous in the box; Gabriel is No9 for Brazil and Leroy – we spent a lot on him because we believe he has the potential. So the next three or four years will be the future of the club. But in the big clubs you have to achieve results immediately and that's why they have to play good now, not in three years.” Vital time

Guardiola, who takes City to West Ham United this evening, believes the next 18 months is a vital time in the players' development. “You have to see they are improving,” he said. “You have to think about the mid-term but tomorrow we have to win.”

Of Sané, who signed from Schalke , Guardiola said: “He's made a leap. He arrived a little bit like: 'Wow, where am I?' And sometimes for some players you can't forget that. Since the game against Arsenal [when Sané scored his first Premier League goal] and against big teams like Tottenham, and maybe since his first game away, at Crystal Palace – their stadium is small, with the long balls, fighting – he reacted well. That's so important for us and him because we can see his level. He attacks and runs in behind like few players I have seen in my life.

“He's so good at attacking the space, he's really good with the ball and dribbling but still he has a lot of things to improve. He misses some passes when he's completely alone but he's 20, 21 and we can't forget. This is his first time in England . He's played well but sooner or later he'll decline a little bit. This happens, especially with wingers, but the talent is there and we are there to help him.

“That's why we bought him and he has a quality that is difficult to find. Even without the ball he's getting better. He's so aggressive when he doesn't have it. Hopefully he can be stable and keep going.”

Guardiola is confident Fernandinho will sign a new long-term deal to stay at City. “I am so happy with him and would be delighted if he continues for a long time here,” he said of the midfielder. “He has one more year on his contract. It's not just in my mind but the club's mind. He's an important player for us.”

Tosin Adarabioyo has only six months left on his terms but the club are confident the 19-year-old defender will agree a fresh deal. “ Manchester City has a really good academy and they're winning titles at all ages,” said Guardiola. “I would like to involve and love to work with young players. Tosin is involved in training with us.”