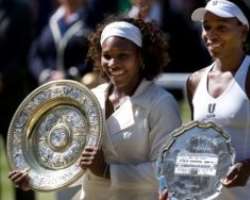 S erena Williams' 23rd major title, catapulting her beyond Steffi Graf as the most decorated champion of the Open era, can be depicted either as a stirring affirmation or a chilling warning.

It is easy enough to subscribe to the first school of thought, given the serenity with which she swept aside sister Venus for a 6-4, 6-4 victory and a seventh Australian Open title, itself another record in a career creaking under the weight of its own history.

What tennis struggles to accept, though, is the counter-argument that Serena's sustained pre-eminence casts her would-be rivals in a deeply unflattering light. For all that the sport bathed in a soothing all-our-yesterdays feel at Melbourne Park, as Venus and Serena met in a Grand Slam final 16 years after their first, it needed also to come to terms with the pitiful lack of depth among the chasing pack.

T he reality is that Serena, at the age of 35 – Graf, let it be noted, retired at 30 – has won her latest major without dropping a single set and despite playing nowhere close to her best. Just listen to the verdict of her coach, Patrick Mouratoglou. “She played well enough to win, but she can play much better,” said the Frenchman, doing little to enthuse about a match where, yet again, sport's most celebrated sister act seldom caught light.

In nine major finals between this pair, only two have gone to a third set. The love and respect that Venus and Serena never tire of expressing for one another equates on court to an inescapable lack of intensity, to a feeling that, even after 28 meetings on tour, they have never quite become used to facing across the net for such heightened stakes. The sisters had kind words to say about each other after the match Credit: getty images

I t was different when they were little girls on the rutted public courts of Compton, Los Angeles, where one-upmanship could prevail, but few of their encounters with a championship on the line have touched the realm of classics. For both of them, this was a familiar replay of treasured memories but seldom a compelling contest, as Serena made a decisive break late in the first set and never took another backward step.

Today, only Australia's Margaret Court stands ahead of her in the compendium of all-time greatness, with 24 titles to her 23, but it is largely an incidental detail. Court belonged to an amateur era when the main draw comprised 16 players, not 128, and when she could juggle the stresses of the tennis circuit with the demands of being a mother-of-four. Already, Serena stands alone.

A gesture yesterday by her sponsors, Nike, illustrated as much by fitting her out with boots emblazoned with '23', evoking not just her colossal haul of silverware but the number once famously worn by Michael Jordan.

She has long since acquired Jordan-esque stature, establishing a standard that none in her peer group can even hope to emulate. Having amassed her titles under four different US presidents, she has reached a stage where she can afford to enjoy herself more openly. “We're thirty-fun!” she said, at a trophy ceremony where neither she nor Venus could stop smiling. A bout the only frontier left for her to conquer is the calendar Grand Slam, which Graf accomplished in 1988. She came agonisingly close in 2015, ticking off the season's first three majors before falling in the US Open semi-finals to Roberta Vinci, and there is little reason to suspect she cannot make another serious tilt at it this year. For where, exactly, is the competition?

Viktoria Azarenka is taking time away from tennis with a new baby, while Maria Sharapova is still to return from a 15-month doping ban. As for Germany's Angelique Kerber, who briefly usurped her as world No 1? Well, heavy is the head that wears the crown. Kerber has won not a single tour event in her 20-week reign at the summit. Venus was unable to match her sister when Serena landed her first serves Credit: epa

F or all that Serena likes to project a certain humility, not least in a touching embrace with her sister once the match was done, she is clearly aware of her own claims on immortality. Asked whether she and Martina Navratilova deserved to be placed ahead of Roger Federer and Rafael Nadal, Sunday’s men's finalists, in the debate about the greatest players of all, she was unambiguous. “I definitely think so,” she replied. “Martina, myself, Steffi – hands down we are leading that conversation.”