Wenger gets four-game ban, will miss Chelsea match next weekend 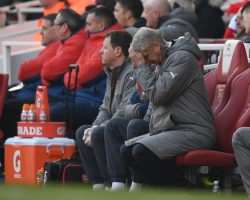 Arsenal's lack of discipline is coming back to bite them this week, with loose cannon Granit Xhaka and grumpy old man Arsene Wenger both copping four-match bans for their actions in the match against Burnley last weekend.

Xhaka was sent off for the second time this season (and the ninth time in the last three seasons!), thus the extra match on his ban, while Wenger lost his temper and pushed the fourth official. Presumably he groveled and apologized enough during his personal hearing to only get the four-match touchline ban .

Arsenal may have ended up winning that game thanks to an offside goal, but the bans, combined with a midfield already short on numbers thanks to injuries and international commitments could prove detrimental to their ambitions in the tightly contested battle for the top four.

Likely joining the lately ever-present Xhaka on the sidelines will be Mohamed Elneny (unless Egypt lose to Morocco this weekend at the Africa Cup of Nations) and Santi Cazorla, who's seemingly always injured these days. With Alex Oxlade-Chamberlain no longer considered for the position apparently , that could leave just Aaron Ramsey, Francis Coquelin and the likes of Maitland-Niles or Reine-Adelaide or Random-Youngster.

With three games coming up in the next 8 days, their resources could be stretched very thin.