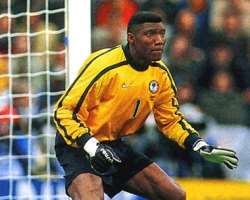 Nigeria defeated Spain 3-2, beat Bulgaria 1-0 and lost to Paraguay 3-1 to lead the group with six points in the group stages of the event.

But Nigeria's dream of playing in the quarterfinals against Brazil was aborted by Denmark in the second round.

Rufai said, 'We were favourites to win the match but somehow we lost the concentration.

'We wanted to make the Brazil match the most memorable but that's football. Denmark were more composed and they got the result.

'I did not plan to play in France but I got an invitation to be part of the team. Even then, I still had to consult with my family for support.'

The former Deportivo de La CoruÃ±a shot stopper was not optimistic about the Eagles campaign at the 2010 World Cup in South Africa. He said coach Lars Lagerback did the right thing with his selection but noted that preparations for the tourney have been poor.

'We should not expect miracles from the coach and the team,' Rufai said.

'He has picked the team he wants to work with and he knows what plans he has for the World Cup. I don't think he is a man that will allow himself to be pushed into doing something else.

'The Eagles should expect to face the challenges of improper blending in South Africa. The players are not bad but they have little time to form the perfect bonding before the World Cup.

'Another problem I envisage is the relationship between the players and the supporters. This aspect is lacking in the team.

'The Eagles have not enjoyed the best of fans support at home. What should have been done is to allow the team to play in front of home fans before leaving for the World Cup. This acts like a morale booster for the players and they get the cheers at the tournament.

'If a player remembers that the fans are around to cheer him, he puts in more effort to succeed.'

Rufai is regarded as the first Nigerian goalkeeper to play abroad after joining AS Dragons FC de l'OuÃ©mÃ© of Benin in 1996. He believes the World Cup on African soil could help African football develop.

He said, 'It is a great honour that the World Cup is holding in Africa. The continent is known to have great footballers who have excelled in Europe and other parts of the world so we should take advantage of this edition to improve our game because it will create a global awareness for African footballers.

'The outside world has had a wrong impression about Africa but this tournament will go a long way to show that we don't just have the players, it will show that the continent can organise the best World Cup. It is not a child's play to host the World Cup; everybody will want to see how successful it will be.

'It will make Africa big. I see it as an opportunity to bring accelerated development to the continent. It will create bigger business awareness and expansion for the continent and there will be better relationship with the visiting nations.'

'I believe South Africa is ready to host the world. We've all seen the extent of their preparations and how FIFA is supporting them to make the tournament the best that has ever been hosted.'