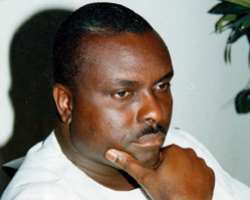 Nigeria and the United Arabs Emirate are on the verge of signing an extradition treaty, a top security source in Abuja has said.

The source, who declined to be named, however, explained that the UAE was not the only country that the Federal Government was in the process of entering such a treaty with.

He spoke on Monday just as the Metropolitan Police of London said that there was no collaboration between it and the Economic and Financial Crimes Commission in the arrest of a former Governor of Delta State, Chief James Ibori, in Dubai.

The source said, 'We started the process last year and it is ongoing. That is why we can't bring Ibori to Nigeria for now from Dubai. We don't have an extradition treaty with the UAE for now, but it is in progress.

'The Nigerian government is making frantic efforts to ensure that its citizens do not escape justice by fleeing abroad after being indicted or on being investigated for corruption.

'That is why we initiated extradition treaty with countries like the UAE and others where we know some Nigerians have chosen as places to invest or stash away ill-gotten wealth.

'For Ibori's case, the UK has a treaty with the UAE and that is why the EFCC is going there with relevant papers and documents to assist the Metropolitan Police in the movement of Ibori to the UK and his eventual trial.

'It is only after the UK might have been through with him that we can apply for his extradition from there to Nigeria to face the charges here.'

An online news agency, Saharareporters had early on Monday quoted unnamed Met. Police officials as saying that they neither consulted with the EFCC nor sought its advice or collaboration in the arrest of Ibori last Thursday.

The anti-graft agency Chairman, Mrs. Farida Waziri, had told journalists in Abuja on Thursday that the EFCC interacted with the interpol and Met. Police since Ibori was declared wanted.

'The man in charge of his case in the UK has dispatched detectives to Dubai to start the process. We are consulting here also,' she had said.

But the Met. Police operatives said the process leading to the former governor's arrest was purely undertaken by them and the UAE authorities through the Serious and Organised Crime Agency in Dubai.

According to Saharareporters, the operatives claimed that they couldn't have trusted the EFCC enough to reveal such a high-level operation to it in advance.

They pointed out that most extradition works were usually handled through diplomatic channels between the government of the UAE and the UK.

The officers said the process of extradition would involve them only when their application for extradition became successful.

UK extradition experts were quoted by the news agency as saying that the 2008 UK/UAE extradition treaty allows for all extradition process to be completed within 60 days.

It was learnt that UK authorities, which would send a written evidence to the UAE to protest the bail granted Ibori, might appoint a prosecutor to represent them at the extradition hearing on Ibori. No date has been fixed for the hearing.

Another security source confirmed on Monday that stringent conditions attached to the extradition treaty between the UAE and the UK might foreclose the possibility of Ibori's extradition to Nigeria.

Ibori is wanted in London over alleged money laundering. His associates and sister are already facing trial in the UK over the same offence.

In Nigeria, he is wanted by the EFCC for allegedly selling over 528 million units of Delta State's shares in Oceanic International Bank. He was said to have used the proceeds to acquire an American oil servicing company, Wilbross.

Ibori cannot be brought to Nigeria from Dubai due to lack of extradition treaty between the two countries.

Although the instruments of ratification of the treaty were exchanged on March 3, 2008, the treaty entered into force on April 2, 2008.

Article 2 of the extradition treaty, holds that extradition might be granted if the conduct on which the offence is based is punishable under the laws of both parties by deprivation of liberty for a period of at least one year or by a more severe penalty.

It also provides that a competent court in the country making the request must have convicted the accused and sentenced him to deprivation of liberty for a period of at least six months.

Among the grounds for refusal of extradition is if the country from which the extradition was being requested 'has substantial grounds for believing that the request for extradition has been made for the purpose of prosecuting or punishing a person on account of that person's race, religion, nationality, ethnic origin, political opinions, sex or status.'

Extradition can also be refused; 'if the person sought has been tried and convicted or acquitted by a final judgment in either state or in a third state of the offence for which extradition is requested.

'If the offence for which extradition has been requested is a military offence and not also an offence under ordinary domestic criminal law or if the person has been granted political asylum by the requested party.'

Article 7 provides that requests for extradition shall be submitted through the diplomatic channels.

Under Article 17, Rule of Specialty of the Treaty, the agreement forbids transfer of an extradited person to a third state except with the express permission of the originating country.

When contacted on the telephone, the EFCC Head, Media and Publicity, Mr. Femi Babafemi, simply said the conditions for extradition between the UK and UAE were not 'a problem.'