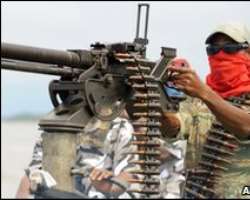 A former Niger Delta militant has said Nigeria's President Goodluck Jonathan is the best person to solve the crisis in the oil-producing region.

Victor Ebokawe, also known as General Boyloaf, told the BBC that, because President Jonathan is from the region, he understands its problems.

Militants have carried out attacks which have cost Nigeria millions in lost oil revenue over the years.

Last year, thousands of militants laid down their arms in return for promises of training and jobs.

But this programme showed signs of started to unravel during the power vacuum while former President Umaru Yar'Adua was sick.

He died earlier this month and Mr Jonathan was sworn in as president to replace him.

On Friday, President Jonathan visited the Niger Delta and said coordination of the amnesty should be improved.

Mr Ebokawe, a leader of the Movement for the Emancipation of the Niger Delta who said he has spoken to Mr Jonathan, believes the Niger Delta's leaders will be patient with the president as he tries to implement the amnesty.

Mr Jonathan has not said whether he wants to contest next year's polls and the governing People's Democratic Party (PDP) has said its candidate will be from the north, not a southerner like him.

"Nothing is going to stop him. He cannot tell us that he will not run," Mr Ebokawe told the BBC's Network Africa programme.

"The presidency of Nigeria is not the birth right of a particular region," he said.

"[Mr Jonathan] is a man who is ready to rule Nigeria as one Nigeria."

The militants say they are campaigning for more of Nigeria's oil wealth to be used to benefit local people but analysts say many attacks and kidnappings of oil workers are carried out by criminals trying to extract ransom payments.