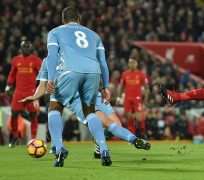 In the end it was routine, perfect preparation for Manchester City on New Year's Eve and a warning to the watching Pep Guardiola of the ruthless efficiency that Jürgen Klopp has created in this Liverpool side. But this was also a show of composure under pressure from Chelsea's closest challengers at the top of the Premier League . Stoke City were good value for an early lead at Anfield until being ruthlessly punished for a series of defensive lapses. Liverpool were in the mood to profit.

Jonathan Walters put Stoke ahead and Mark Hughes must have sensed a first managerial success at Anfield as his team grew in confidence during the first half only to invite Liverpool to turn the tide. Adam Lallana, Roberto Firmino, an own-goal from Giannelli Imbula and Daniel Sturridge – with his first league goal since April – secured an ultimately comfortable home win.

Read more
Stoke's approach was clear from their manager's team selection, with Peter Crouch favoured to lead the line, Mame Diouf stationed on the right and the more intricate skills of Xherdan Shaqiri and Bojan on the substitutes' bench. For the second game in succession Liverpool initially coped with their opponents' direct play but, unlike the potentially pivotal win at Everton on 19 December, their defence creaked before vulnerability spread into the Stoke ranks. The visitors had looked dangerous until their rearguard ruined any prospect of a first top-flight win at Anfield.

With Joe Allen prospering on his return to Anfield and Imbula a powerful presence in central midfield the visitors were compact and inventive, as well as quick to seek Crouch whenever the opportunity arose. But Hughes' team were on the back foot from the first whistle as Liverpool – with the same side for the third consecutive match – looked to capitalise on the space in front of Stoke's full-backs. The diagonal cross from right to left was the home side's preferred option but Firmino and Georginio Wijnaldum just failed to connect. Anfield was then stunned when Stoke took the lead from their first concerted spell of possession.

Hughes insisted beforehand that Stoke had the ammunition to hurt Liverpool and so it proved when, after a patient build-up, Diouf floated a cross into the heart of the home penalty area. Crouch won the first header and, though Ragnar Klavan hooked his goal-bound effort clear, Sadio Mané was slow to react to the second ball. Erik Pieters easily won their aerial challenge on the corner of the box and delivered an inviting left-wing cross to the near post where Jonathan Walters arrived ahead of Dejan Lovren. The Republic of Ireland international and boyhood Evertonian steered a glancing header beyond Simon Mignolet at his near post. Mignolet got a hand to the ball but was unable to redirect its path.

From then on until Lallana's equaliser Stoke continued to unnerve Liverpool with their willingness to break down the flanks in support of Crouch and their control in central midfield. Allen almost doubled the visitors' advantage Mignolet produced a vital save with his foot, the ball spun away from Crouch lurking in front of an open goal to Walters, and his follow-up was blocked by Klavan. Stoke would have other opportunities on the counterattack but none as clear as that key moment. Liverpool heeded the warning and were ruthless once they awoke.

Henderson and Lallana went close, Firmino closer still when he reacted quickest to a Ryan Shawcross clearance and beat Lee Grant with a low drive that Crouch cleared off the line. The pressure was growing but Stoke had defended well until a lapse by one of their old Liverpool contingent, Glen Johnson, offered Klopp's team a way back in. Divock Origi produced a fine piece of centre-forward play, shielding possession under pressure then spraying the ball out to Mané on the right. His cross was met with a heavy touch by Lallana but, instead of clearing for a corner, Johnson miscontrolled and invited the England international – being watched by the national manager, Gareth Southgate – to slip a clinical finish inside Grant's near post from a tight angle. The pattern for the rest of the game had been set.

Firmino edged Liverpool ahead moments before the interval when he collected James Milner's pass inside the area and found himself with time and space to pick his shot, despite Allen, Johnson and Shawcross being in close proximity. The Brazil international, arrested for drink driving on Christmas Eve, showed his focus had not been distracted with a fine finish that kissed the inside of both posts before crossing the line. Stoke complained to referee Michael Oliver that play should have been halted with Mané lying injured in an offside position. He was neither interfering with play nor responsible for the weak defending that continued unabated in the second half.

Any hopes Stoke harboured of a point were destroyed when Imbula started and finished a flowing move. Unfortunately for the visiting player it came at the wrong end of the pitch. His poor header, under no pressure, gave possession to Henderson who unlocked the Stoke rearguard with a fine pass inside Johnson to Origi. The Belgium international crossed low and hard and the recovering Imbula converted into his own net under pressure from Mané.

Sturridge delivered Liverpool's fourth 56 seconds after replacing Origi and thanks to a careless back-pass from Shawcross. The Stoke captain never looked up as he played Johnson's square ball straight into the feet of Sturridge, who rounded Grant before scoring his first Premier League goal of the season.