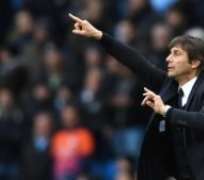 Antonio Conte has (so far) turned out to be just as good, if not better than advertised, masterminding a drastic turnaround in the club’s fortunes in just a few short months since the start of the season.

In addition to the results on the pitch, he’s also living up to his billing as someone who’s worth the price of admission by himself with his touchline behaviour, living the game right alongside his players, kicking every ball as he puts it.  The moving, running, jumping, yelling, berating, praising, fist-pumping, gesticulating hardly ever stops during the 90 minutes — he even has special throat lozenges brought in from Italy to help his voice recover afterwards.  It would be entirely unsurprising if by the end of the season, he wore out the grass in the technical area as goalkeepers used to wear out their six-yard box back in the olden days.  Sadly, neither Chelsea TV not any other TV company has taken our suggestion to do a “Conte-cam” just yet, but maybe one day.

We do of course wonder just how much effect this actually has within a game.  We’ve seen and heard a range of reactions to it already, from Costa’s apparent dislike of the constant yelling in at least one game (smoothed over quickly afterwards), to Hazard (jokingly?) talking about how it just gets lost in the rest of the noise anyway, especially if you’re on the opposite side of the pitch.

While the biggest beneficiary of Conte’s antics is Conte himself, one man who spends at least half the game being pretty close to it all claims that it does have a positive impact on the team, serving as motivation and inspiration if nothing else.

“I’m pleased to have him. He is very passionate about the game. Obviously everyone’s seen him on the touchline. The way he reacts and stuff, we as players like it. It motivated us to actually do well and work hard for him.”

“He is constantly in my ears just to make sure I’m doing the right thing and in the right position.”

-Victor Moses; source:  Sport Magazine
The rest of Moses’s interview with Sport Magazine is also worth a read, though there’s not much new information in there if you’ve been reading any of the recent barrage of articles about his life story.

12:31 PM – 8 Dec 2016
Promised land
Victor Moses has a tattoo on his neck. It shows two pairs of dice, with angel wings. It has been a whirlwind few months for Chelsea's 25-year-old Nigerian, who would have returned to the club for…