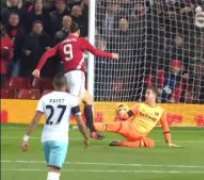 ANTHONY Martial and Zlatan Ibrahimovic were in the goals as Manchester United beat West Ham 4-1 in the EFL Cup quarter-final at Old Trafford.

United took the lead after just two minutes through Ibrahimovic, lifting the ball over Adrian after Henrikh Mkhitaryan's superb backheel.

But West Ham equalised later in the first half through former United man Ashley Fletcher, who pounced on David de Gea's fumble from Dimitri Payet's effort.

Martial put the hosts ahead in the third minute of the second half, finding the top-left corner from 14 yards after Mkhitaryan's cut-back.

And the Frenchman made it 3-1 after the hour mark, simply finishing from close range after Antonio Valencia's ball across the face of goal, before Ibrahimovic's stoppage-time goal from close range put the icing on the cake. Jose Mourinho was banned from the touchline for the match after kicking a water bottle during the 1-1 draw against the Hammers on Sunday, and made five changes from the weekend.

Wayne Rooney came back into the side alongside Luke Shaw, Mkhitaryan, Michael Carrick and Marital, while West Ham also made five changes. Man Utd sped out of the blocks, and were ahead within 90 seconds. After Rooney found Mkhitaryan with a central ball, the Armenian's backheel set Ibrahimovic through on goal, and the Swede subtly lifted the ball over Adrian. Ibrahimovic should have had a second just six minutes later as West Ham backed off the striker, but his left-footed effort and subsequent rebound were saved well by Adrian.

Martial saw an effort from the left of the area again saved by Adrian as Man Utd dominated the chances, but West Ham were level on 35 minutes. Cutting in from the left, Payet's low effort moved slightly, though De Gea should have done better as he fumbled the ball into Fletcher's path.

The 21-year-old, who had been on Man Utd's books for seven years from 2009, made no mistake from eight yards.

Martial put Man Utd back ahead three minutes after the break, finding the top corner with a fine finish after Mkhitaryan had found him with a cut-back, and he should have had a second shortly after, shooting straight at Adrian after being put through on goal by Rooney.

He did get his second and Man Utd's third on 62 minutes, finishing off from close range after Valencia's fine centre.

Ibrahimovic forced Adrian to tip his low effort wide from the left of the area, but the Swede got his second in stoppage time, slotting home from close range after Ander Herrera had done superbly to get to the byline and cross