Chelsea confident Diego Costa will be fit to face Middlesbrough 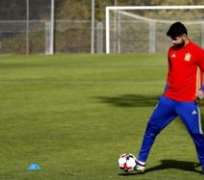 Chelsea are confident Diego Costa will be fit for Sunday's trip to Middlesbrough, despite the fact the striker was forced to withdraw from the Spain squad.

Costa pulled out of the Spain squad for the games against Macedonia and England with a groin problem, but has made good progress since returning to Chelsea's Cobham training centre.

The 28-year-old did not partake in full training on Wednesday, but still worked with the ball and, barring any set-backs, is expected to be fit to face Middlesbrough.

C osta's fitness comes as a huge boost to Chelsea, together with the fact that Eden Hazard is fit for Sunday.

Hazard was taken off as a precaution in Belgium's 8-1 World Cup qualifying victory over Estonia, but has returned to training with Chelsea.

Costa has returned to his best form under head coach Antonio Conte, scoring nine Premier League goals already, while Hazard has hit the back of the net seven times.

C helsea are aiming for a sixth successive Premier League victory at the Riverside Stadium after hauling themselves back into the title race.

But Middlesbrough manager Aitor Karanka will be able to take tips from former Chelsea manager Jose Mourinho, who he is extremely close to.

The pair worked together at Real Madrid and remain close friends, and Karanka is expected to tap into Mourinho's knowledge of his old players.