Super Eagles have recipe for victory against Algeria: Mikel Obi 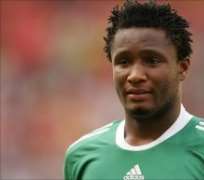 Super Eagles skipper, Mikel Obi has said the team cannot afford to lose today's 2018 FIFA World Cup qualifier against Algeria at the Godswill Akpabio Stadium, Uyo. The Chelsea midfielder, while speaking last night, said the three- time African Champions can come out top against Algeria if the players cover up for each other and maintain premium concentration for the duration of the eagerly-anticipated cracker.

Mikel Obi While urging his teammates to present a united front to stop the Desert Foxes, Mikel said the Nigerians have extra motivation to get maximum points today because of their failure to qualify for next year's Africa Cup of Nations in Gabon. “To win, we must fight for each other, cover up for other and play with a unity of purpose. Missing out on the 2017 Cup of Nations gives us an extra motivation to win our group and go to Russia,” Mikel said.

He added that for Eagles to win, “we must convert our scoring opportunities and follow the instructions of the coach”., Continuing, Mikel said, “we know Algeria have great players, but we also have good footballers and there is a family-like atmosphere within the squad”. The midfielder also said the mixture of the experienced and youngsters was shaping the team into a potent force to reckon with in Africa.

“It is nice to play with young footballers who are hungry to establish themselves as first-team players. I recall my early days in the national team, playing with top stars like Jay-Jay Okocha and Nwankwo Kanu. It was a great pleasure playing with them. “It is the same with guys like Iwobi and Iheanacho. We enjoy representing our country,” said Mikel