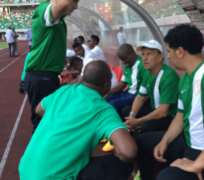 Super Eagles Technical Adviser, Gernot Rohr, on Tuesday in Abuja said the team was on course for the crucial Russia 2018 FIFA World Cup qualifier against Algeria.

Rohr, who spoke to newsmen after the first training of the team in Abuja said the team was right on schedule ahead of the explosive encounter.

Captain Mikel Obi, Ahmed Musa and 18 others on Tuesday took part in the training session at the National Stadium, Abuja.

Mikel and Musa were among the latest arrivals at the team's camp on Monday night.

The team were separated into three groups and began with a light walk-out and head-tennis training under the watchful eyes of Super Eagles' Technical Adviser, Gernot Rohr and Coach Salisu Yusuf.

NAN observed that Ezenwa was very sharp in goal and displayed good reflexes, while his counterpart, Akpeyi was a little jaded and lacked match fitness.

Mikel showed some sign of class and precision in his touches and passes, while Victor, Iheanacho and Iwobi were in excellent form.

The trio of Leon Balogun, Brown Ideye and Shehu Abdullahi who were nursing knee and ankle injuries were engaged in light ball work.

NAN, however, reports that Goalkeeper Dele Alampasu, Elderson Echiejile and Oghenekaro Etebo have yet to arrive at the camp.

The Super Eagles are expected to hold another training session later on Tuesday.

The Super Eagles will lock horns with Algeria in crucial Russia 2018 FIFA World Cup qualifier at the Godswill Akpabio Stadium, Uyo on Saturday.

Rohr, who spoke to newsmen after the training, said the team was right on schedule ahead of the explosive encounter.

“My players showed good signs of strength and character today. It was a good test and they are in good spirit.

“Today is our first training; yesterday we had training with one or two players, who didn't play during the weekend.

“We have the time to execute our plan for the game between tomorrow (Wednesday) and Thursday.

“We know we have to play against the number one team in Africa; they drew their first game, so it's very important for us to collect all three points from this game.

“We had 20 players in training today, while three others are expected to join us tonight. So, we will be complete in the evening,'' he said.

He, however, explained that the players were trying to recover having played for their various clubs at the weekend.

“We had a light training this morning because some of the players just played two days ago and had to connect with night flights and barely arrived some hours ago.

“We also have three injuries, not so serious, but we have to be careful with everybody.

“Leon Balogun suffered a knock on the knee, while Brown Ideye and Shehu Abdullahi have problems with their ankles.

“So, I hope they will be fit by tomorrow to train with the rest of the team, while we wait for the three other players to join us tonight.

The team will have another training session later on.

Also speaking to journalists at the end of the training session, Mikel Obi also said the team must remain focused and disciplined to achieve their World Cup qualification goal.

Mikel, who also spoke to newsmen after the training, admitted that the game against Algeria would be a very difficult one.

He, therefore, urged the team to ensure that all hands were on deck to take all three points from the game.

“We must continue to do exactly what we are doing.
“We've been doing things right, we have been playing well and look solid as a team.

“So, we have to continue to do exactly what we are doing, maintain focus, discipline in camp and ensure we work very hard toward Saturday,'' Obi said.

He noted that though the Algerians would be a very hard nut to crack, he was confident that the Super Eagles would be victorious.

“Even though we have a couple of experienced players, the team is very young and energetic. So, the counter-attacking style of the Algerians will not be a problem for us.

“We can recover, we can attack. We've got the legs to do that.

“They will play to their own strength, while we also play to our own strength and I think it is going to be a very tactical game.

“So, we have to be careful. We want to win but a draw wouldn't be a bad result,'' Obi said.