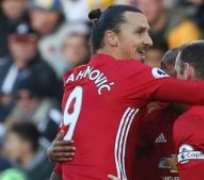 Heading to Swansea on Sunday, Manchester United desperately needed an inspirational display from Zlatan Ibrahimovic. The club wanted to see Wayne Rooney playing a key part in its best football again. Paul Pogba was required to put in a performance which would underline his worth as the world's most expensive footballer. And boy how they all delivered.

United was sublime as it steamrolled a listless Swansea City side, which on this evidence is not long for the Premier League. But the visiting side was every bit as good as the Swans were bad in the 3-1 triumph, with Michael Carrick dictating the pace and flow of the game from the base of midfield and allowing the bigger names in red shirts to finally find their feet.

After Pogba began a promising move in the 15th minute, Ibrahimovic and Rooney combined to tee up the Frenchman for a beautifully-guided effort into the far corner of the net from the edge of the box. Ibra then ended his eight-week league drought by driving home low from Rooney's cut-back from the left. And it was 3-0 when the Swede's great hold-up play was taken on by Rooney, who returned the ball to Ibrahimovic for a left-foot strike beyond Lukasz Fabianski.

Every goal was taken with a confidence which belied United's recent form, but from the moment Pogba found the net there never looked likely to be anything but a United win to come out of the fixture. The combination play between Rooney and Ibrahimovic was particularly impressive as the former Paris Saint-Germain front man, whose first goal was also the 25,000th in Premier League history, finally revelled in having another canny attacking presence around him.

While Rooney's play was still occasionally lackluster, with his first touch remaining suspect at times, his instinct for providing the right run at the right time helped to make more of Ibrahimovic's approach play than has been occurring since the captain was first dropped for the 4-1 win over Leicester City in September.

Pogba, too, benefitted from being utilized in a more appropriate position for his qualities. Too often this season he has either been wasted in a deeper holding midfield role at the base of a 4-2-3-1, or has played from a more elevated No.10 role which has seen him asked to do more with his back to goal than he is tailored to provide. The presence of Carrick in the engine room for the first time in the Premier League this season gave Pogba greater licence to take the ball on driving towards goal. And he execelled in the position.

Carrick has waited a long time to be given the opportunity by Jose Mourinho this term, and only really got the go-ahead against Swansea due to the suspension picked up by Ander Herrera as a result of last week's red card against Burnley. But this was the perfect showcase of what the England veteran can provide, and it would be a huge surprise if he was not rewarded with another start against Arsenal when the league calendar resumes in 13 days' time.

Swansea looks doomed, even at this early stage, but take nothing away from what a result and a performance like this could do for United. There have been false dawns before now, of course, with the Leicester win having promised a renaissance that never quite arrived, but this was as Manchester United a display as has been seen for some time.

There were question marks about Mourinho's defensive selections pre-match, with Ashley Young, Phil Jones, Marcos Rojo and Matteo Darmian being picked as a back four for the first time, but the quality of United's possession and attacking play ensured the makeshift defense was rarely asked any questions. Swansea did take advantage after a short period of pressure midway through the second half, with Mike van der Hoorn heading home from a free kick, but the outcome was never really in doubt.

One thing working against United following this result, of course, is the timing of the international break which follows. When teams find form, the last thing they need is a two-week break before they get the chance to build upon it. But the confidence on display here will give fans a huge boost after watching so many players' heads drop in recent weeks, and the Premier League hiatus will be a far more pleasant one than it might have been.