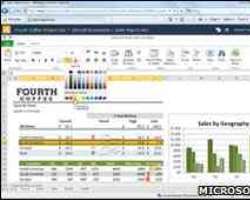 There is only one thing more important to Microsoft than the success of its new Windows 7 operating system, and that's the success of Office 2010, the latest version of its suite of productivity software.

For Microsoft, Office is the real cash cow. Except in years when Microsoft launches a new operating system, it is Office that generates most of the firm's profits through corporate licensing deals.

But a lot has changed since the last launch of the US software giant's office software package – with Word for text processing, Outlook for e-mail, Powerpoint for presentations, and corporate mainstay Excel for spreadsheets (plus a range of other applications).

Who needs documents? Microsoft Office goes online
For starters, people are using computers differently. Companies now have to provide for a highly mobile and dispersed workforce; consumers, meanwhile, live their digital lives less through e-mail and more through social networks.

Companies also still worry about the economy; spending on information technology is recovering, but slowly.

Microsoft now has competition, most notably from old rival Google with its range of free (for consumers) or cheap (for companies) online applications.

These days “it is very hard to sell an office suite to consumers”, says Sheri McLeish, an analyst with technology consulting firm Forrester. Most have some version of Office on their computer, she says, and for everybody else “there is a huge choice of free alternatives”.

“The influence of Google” on the consumer market, she says, “means that Microsoft is not as dominant anymore.”

Finally, consumers have “less of a need to engage with documents”. E-mail and Word documents are losing their importance as more people communicate via social networks such as Twitter and Facebook, and these “are not documents-based”, says Ms McLeish.

The online counterstrike
Microsoft, however, has a cunning plan.
While the full version of Office is still a chunky and pricey piece of software, soon all Office applications will be available through the web.

“The way people work is changing… they are working more and more from everywhere… home and the workspace are merging. Per-Olof Schroeder Microsoft

Even better, for consumers they will be free.
Microsoft is playing to the strength of its global reach. “Microsoft Office Web Apps” will be available to more than 500 million people using free Windows Live services such as Hotmail, online storage Skydrive and Live Messenger.

Another boost: under the name Docs.com, the service will be available to all users of Facebook, one of the world's most popular social networking sites.

Microsoft's biggest weapon, though, argues Forrester's Sheri McLeish is “familiarity”, which “can not be underestimated”.

Most people just know how to use Office – although that's true only to a point. With Office 2007, Microsoft introduced a new top-level navigation, a so-called ribbon of commands relevant in the context of what you were working on.

What seemed like a good idea turned out to be a major irritation for most. Microsoft has not given up on the concept, though, and rolled out the ribbon across all Office applications, including their online versions.

After plenty of refinements, “we are seeing less and less negative feedback on the ribbon,” says Per-Olof Schroeder of Microsoft's Office division.

High fidelity
Microsoft also hopes to win on quality of service. Yes, Office web apps won't be as powerful as the real applications installed on a computer but they will be better than those offered by rivals, the company claims.

Many browser-based applications struggle to maintain the formatting of original documents. Microsoft, in contrast, promises “high fidelity” editing and viewing, including an online “player” for Powerpoint presentations on computers that don't have this resource-intensive software.

But why is Microsoft giving away all this for free?

Company executives are shy to answer, but the explanation is obvious: Office 2010 is the ultimate freemium deal – where some basic services are offered for free, while power users are happy to pay a premium.

And the power users are corporate clients.
The enterprise play
Microsoft has taken a page out of Apple's play-book, says Ms McLeish. There is a new generation of computer users growing up. Giving them Office web apps for free makes them familiar with Microsoft products, and “when they enter the workforce, they will want something they are familiar with”.

It also works for existing users. “The way people work is changing,” says Mr Schroeder. “They are working more and more from everywhere… home and the workspace are merging.

“That's how we position Office 2010, regardless of how you access it, on your PC or through you browser… you have high-fidelity viewing and a very good user interface,” says Mr Schroeder.

Microsoft's lynchpin is its Sharepoint software, which allows people to share and collaborate on documents. The software, an integral part of the Office 2010 package, is “going like gangbusters,” reports Ms McLeish. A third of big enterprises plan to upgrade to Sharepoint 2010 within a year, and that in turn will drive the corporate success of the Office 2010, says Forrester.

While “for the broad masses it's going to be a slow transition” to the new Office suite, “for businesses, I'm bullish for the product,” she says.

Into the cloud
Of course, Sharepoint is not the only collaboration tool around. Plenty of companies – including Google – offer applications, tools and databases online.

It's called “cloud computing”, but even here Microsoft has the advantage that companies still live overwhelmingly in a Microsoft world.

“The cloud story is coming together for Microsoft, and Office 2010 is a key part of that,” says Per-Olof Schroeder.

And while most consumers will be perfectly happy with the limited features of Docs.com, Mr Schroeder predicts that companies will find themselves in “a lot of scenarios that require much more advanced capabilities” – in other words a fully paid-up version of Office 2010.

The software
So does Microsoft meet its online/offline promises?

Docs.com is still in “beta”, an invitation-only service with plenty of software bugs.

The user interface has a clear, clean look that will make most Office users feel at home. The workflow – where to click, in which order – still needs improving.

The Office 2010 software itself runs faster than its predecessor and sports many clever improvements (my favourite: a meeting invitation sent to Outlook automatically shows whether it can fit in the diary or not).

But Office is still very much a corporate product. Microsoft must hope that its web apps are compelling enough to have future generations clamouring for the Microsoft experience at work.