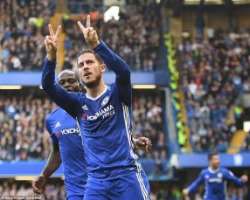 Reports of Antonio Conte’s demise have been greatly exaggerated. A few days after bookmakers took a flurry bets on the Chelsea manager leaving, his team turned in a performance that left even the notoriously hard-to-please Roman Abramovich laughing and clapping.

Chelsea were sharp and incisive and deserved their goals from Diego Costa, Eden Hazard and Victor Moses as a bare minimum. Defender David Luiz (No 30) looks delighted as he enjoys Moses’ goal, which was assisted by Nathaniel Chalobah