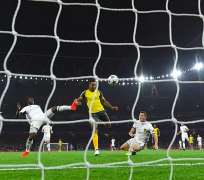 Arsene Wenger played a predictable lineup on the day, only making two changes from last Saturday's 3-0 win over Chelsea. David Ospina came in for Petr Cech, continuing his position as Arsenal's Champions League goalkeeper, and Granit Xhaka came in for the injured Francis Coquelin.

Arsenal opened the scoring in the 7th minute of another wonderful team goal. Santi Cazorla played a brilliant lofted pass to the on-rushing Alexis who crossed the ball into the box onto the head of Theo Walcott.

Basel began to get into the game more after the initial goal, earning a few corners, but not troubling Ospina.

Arsenal then doubled their advantage in the 26th minute as Alexis and Theo again combined to put the ball in the back of the net. The English winger drove forward, played a quick 1-2 with Alexis, and found himself through on goal. He still had a lot to do, perfectly pinging a shot from a tight angle past the hand of the keeper, off the goal post, and in.

While Basel responded fairly well to the first goal, the began to be overrun by the Gunners after the second.

Arsenal had a penalty shout not 2 minutes after the second goal as Eder Balanta slid through the back of Theo who was going for a loose ball in the box after Tomas Vaclik came out to smother an Alexis opportunity.

Alexis should have made it 3-0 in the 33rd minute as Arsenal broke quickly through Hector Bellerin and Theo. Theo played the ball to Santi who put Alexis through on goal, but Viclik did well to get an arm to the chip attempt. Arsenal continued piling on the pressure seconds later as a Theo cross was begging for a far post run that Alex Iwobi did not make.

Ozil was played through on goal himself in the 36th minute as Shkodran Mustafi won the ball upfield and played a brilliant throughball, but the German chipped his effort wide of the goal.

In the 38th minute, Nacho Monreal lofted it to Alexis whose left-footed shot was well-saved. Theo could only fire the rebound into a central defender.

Ozil had another great chance in the 41st minute as Alexis crossed the ball to find the far post run of the Gunners' No. 11, but Ozil's first time volley from a tight angle hit the side netting.

Basel had a rare 1v2 in the 43rd minute as Iwobi misplaced a pass straight to Seydou Doumbia, but Laurent Koscielny bided his time and nicked the ball away from the striker before anything could come of it.

Halftime could not come soon enough for the away side, even as the referee blew his whistle at the 44:58 mark.

Arsenal continued their dominance to start the second half with Alexis nicking the ball off Marek Suchy. Instead of going for goal, the Chilean tried to play Ozil in, but the pass was intercepted.

Arsenal broke forward quickly in the 57th minute as Iwobi charged forward into the box. With Alexis and Ozil making runs on either side of him, taking defenders with them, the youngster chose to attempt a shot that was fired just wide of goal.

Ospina was finally called into action in the 62nd minute, tipping over a long range effort from Birkir Bjarnason that probably was off target anyways. Hard to fault the keeper for wanting to take a touch after a quiet evening.

Moments later, on a corner, Ospina barely got a fist to the ball which fell to Bjarnason whose half-chance was skied.

Arsenal, again, should have made it 3 in the 67th minute as Santi played in Theo whose chip back to Alexis 8 yards from goal was hit wide.

The Gunners made a double substitution in the 70th minute as Mohamed Elneny and Alex Oxlade-Chamberlain came on for Alex Iwobi and Theo Walcott. Kieran Gibbs came on for Nacho Monreal in the 75th minute.

Arsenal had a scare in the 83rd minute as Mustafi came over to make a clearance and landed awkwardly, seemingly injuring his knee. The centerback wasn't down long though and was able to walk off the knock.

Arsenal got a free kick on the edge of the box in the 85th minute as Mohamed Elyounoussi clipped Alexis as he dribbled his way past multiple defenders. Unfortunately, Santi couldn't get his free kick under the jumping wall.

Basel had an excellent opportunity in the 88th minute as Andraz Sporar was played through on goal from what the Arsenal defense thought was an offside position. Fortunately for Arsenal, Ospina closed the angle and made a fine save. Arsenal quickly followed that Basel chance up with a counter. Bellerin played Oxlade-Chamberlain through on goal. The Ox's touch to avoid the onrushing keeper took him too far wide and his cross was eventually cut out for a corner.

Alexis nearly scored off that corner as Mustafi's header found him 5 yards out from goal. It was not to be though as his shot was fired into the keeper and out for another corner. Frustrated at not having put away any of his chances, Alexis kicked the signage behind the goal in disgust.

Despite having a half-dozen great chances, and another half-dozen half chances, to score more, Arsenal settled for a comfortable win. Like Saturday, there were no poor performances in what was yet another confidence-building win for this Gunners side.

PSG defeated Ludogorets 3-1 in that Group A match-up, meaning Arsenal are level on points with the French champions through two matches.