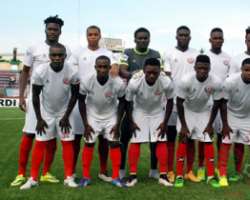 The coal city is bubbling with expectations as their darling club  Rangers International are set to break 32 years old trophy jinx. The people and government of the state are said to be readying a  carnival-like show to celebrate their expected emergence as  champions of the Nigeria Professional Football League 2015/16 season.

Rangers are just a point from lifting the Nigeria Professional Football League title for the first time in over 30 years.

The league leaders on Sunday evening beat already relegated Ikorodu United by two goals to one, while their closest rival Rivers United were held to a goalless draw by Abia Warriors.

This means Rangers are on 60 points from 35 games while Rivers are on 57 points with a game left.

A draw for Rangers in their last home game against El-Kanemi Warriors will see them crowned champions.

Enugu State Governor, Chief Ifeanyi Ugwuanyi,  has ordered that the gate to the Nnamdi Azikiwe Stadium, Enugu, popularly known as The Cathedral be thrown  open for fans to go in for free to watch the Rangers Vs El-Kanemi Warriors game live at the Nnamdi Azikwe Stadium. The club said that the gates of the stadium would be opened from 1.00pm on Sunday and would be closed once it reaches its capacity 25, 000 seats.

“The gates for the final game of the season on 2 October at the Nnamdi Azikiwe Stadium have been declared open by H.E Gov Ifeanyi Ugwuanyi,” the first in the series of tweets from Rangers on Tuesday read.

The “awaiting champions” added: “In light of this we appeal to our endearing fans to be prompt as the gates will be open from 1pm

“Our home The Nnamdi Azikiwe Stadium has a capacity for 25,000 fans, we shall close the gates at capacity crowd so please come early.

“We have pre match and post match entertainment, so come prepared for the carnival which is @RangersIntFC,” the club concluded.

It will take Rangers losing at home by as much as four-goal margin, while Rivers United win away for the tables to turn round.

Fans have been told to don the white and red colours of Rangers when coming for Sunday's game and should be in their best behaviour as they have been all through the season.