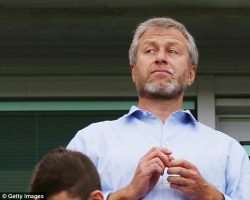 Roman Abramovich will make funds available to Antonio Conte as the Chelsea manager looks to solve the defensive crisis that has blighted their season so far.

The usually ruthless Russian tycoon is said to be sympathetic towards his latest manager, who has seen his side slump to two consecutive Premier League defeats, thanks largely to the team’s defensive deficiencies.

Having failed to land his first-choice defensive targets in the summer, Conte’s current back-four does not have the personnel he envisaged in pre-season – a failing the Blues owner is aware of. Conte and his staff have privately acknowledged his side’s defensive options need replenishing during the next two transfer windows, which has cast serious doubt over the Chelsea futures of Branislav Ivanovic and Gary Cahill, who have both endured slow starts to the season.

And Abramovich will make significant cash available to his manager to ensure he has a fair crack at solving the defensive problems that have beset their campaign so far.

Despite their recent troubles, the Chelsea owner is behind his Italian manager.

Indeed, it is understood Abramovich made a beeline for Conte straight after the 2-1 home defeat to Liverpool on September 17 – the Italians first as Blues manger – to offer encouragement to his summer appointment.

Should Chelsea’s recent slump continue, the Blues owner could be forced into a rethink; history shows that Abramovich isn’t it afraid to get rid of managers mid-season. But, at least for now, Conte will be trusted to solve the problem of Chelsea’s ageing defence.

Captain John Terry is expected to return to action against Hull this weekend after missing the club’s previous three games with an ankle injury picked up in the 2-2 draw at Swansea.

Chelsea have lost both league games Terry has missed, against Liverpool and then Saturday’s humiliation at Arsenal, so his return to action will be a huge boost for Conte.

Nevertheless, the fact Terry is 35 is not lost on Conte, who has already started the process of finding his captain’s long-term successor.