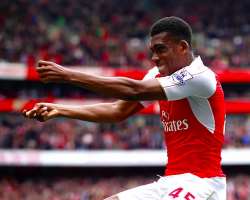 A year ago, Alex Iwobi was plying his trade with the Arsenal U21 side. Coming off a fairly impressive preseason, most thought he'd continue his development there, train with the first team frequently, and get some experience in the then-Capital One Cup, if the draw was right. Today, it's tough to envision our best starting lineup without him. After yet another impressive display against London rivals Chelsea this weekend, it's a great time to look at Iwobi's rise from an overlooked Arsenal youth prospect to first-team regular.

As a graduate of the Arsenal Academy, Iwobi is one of the few Hale End products to make the grade at Arsenal in recent history. He joined the academy at the tender age of 7 and was offered a scholarship in 2012. He first broke into regular youth team football with the U18s in the 2012/13 season, primarily as a winger.

It's fascinating to consider that Iwobi flew under the radar for much of his Arsenal youth career, at least compared to his fellow top prospects. As recently as the 13/14 season, similarly aged Jack Jebb (!) was preferred to him in the youth setup. Serge Gnabry and Chuba Akpom (both of whom have made first team appearances), Jon Toral, and even the likes of Brandon Ormond-Ottewill, Anthony Jeffrey and Austin Lipman were initially more heralded than Iwobi was.

Even as he began to surpass these players in his same age group, younger up and coming talents, such as Ainsley Maitland-Niles, Gedion Zelalem, Dan Crowley and Chris Willock stole the youth spotlight.

The 13/14 season was when Iwobi's stock began to rise. He was consistently a top performer when playing for the U18s, U19s, and U21s at the age of 17. For a time that season, he also played behind the striker, in a role similar to Mesut Özil. In my first piece for this site , I mentioned how Iwobi and Maitland-Niles, playing in the UEFA Youth League side that season, were far more enjoyable to watch than the older prospects. But even then, Iwobi was a footnote.

His star really began to rise in the 14/15 season, where he played striker for the U19 and U21 sides due to Akpom's loan. He flourished in that role, scoring many more goals than he had from wide positions previously.

On the basis of that year's performance, he was the second youth prospect mentioned in my 15/16 youth preview , behind Zelalem, Arsenal's most-hyped prospect of recent years. While I thought he would continue his education as a center forward, Arsene Wenger had other plans. Iwobi was deployed in a box-to-box midfield role for the youth sides, a role in which he thrived. Arsenal tend to move players around from position to position frequently in the youth ranks, and it's difficult to know when a move is made because of a plan or because “we need someone to play there today you should go do that”.

In hindsight, it's easy to see this move was actually finishing school for Iwobi's graduation into the first team. He polished off his defensive responsibility, positioning, and distribution and propelled himself into first-team contention.

Still, it took an injury crisis as severe as any in the past decade at the club to give him his big break. His first start in a meaningful match was the FA Cup encounter with Sunderland in January of this year. In that match, Iwobi was impressive, playing an advanced central midfield role alongside Alex Oxlade-Chamberlain in what amounted to a 4-1-4-1. My review of his performance would become a template for future write-ups of his matches: “good positioning in attacking play, smart passing, solid combinations, a couple moments of brilliance, and more than a few rash dribbles from someone not used to this level of competition” and lauding “his adaptability and calm demeanor on the pitch.”

In that review, I questioned whether Iwobi had enough top end skill to make it as a winger or wide forward in the Premier League. While I was referencing physical talents, I failed to consider that Iwobi's impressive decision-making and vision were, in fact, traits that could carry him to the highest levels of the sport.

Even after that impressive performance, Iwobi was limited to domestic cup action only until he was handed a start at the Camp Nou against Barcelona in the Champions League. From that point on, he has entrenched himself in the starting XI as a perfect compliment to our two attacking stars, Özil and Alexis Sánchez. He's the wide playmaker we've been searching for since Santi Cazorla's move into central midfield in 2014/15.

Stylistically, he seems more like an heir to Samir Nasri, who shone when paired with brighter stars Robin van Persie and Cesc Fabregas. Iwobi, like Nasri, is skilled enough to keep the ball and operate as an extra midfielder in Arsenal's possession based system, quick enough to counter swiftly when the opportunity arises, smart enough to play the final ball or make the right run to open up space, and he also strikes a shot well.

After Samir Nasri left, the heirs to his role (other than Santi Cazorla when he was played there in 13/14) have failed to be the complete package. Aaron Ramsey, who despite his desire to be deployed centrally was probably the best of this bunch, offered the extra midfielder, final ball, and shooting abilities, but at times hampered our play with his lack of pace and unfamiliarity in making runs from wide positions.

Alex Oxlade-Chamberlain, despite being listed as a midfielder, has never been comfortable making smart passes and keeping possession, and has struggled making the right dribble/pass/shot decisions in the final third. Joel Campbell didn't offer much as an extra midfielder and really only performed well as a thrift store Alexis, a more adventurous and risk-taking wide forward. Lukas Podolski could shoot (boy, could he shoot), and made nice runs from time to time, but he stifled Arsenal's attacks in possession.

Iwobi isn't a finished product yet, but it's impossible to watch him and not think he has a great chance of being an Arsenal mainstay for a long time. It's not just the on-field performance; look at the humility this kid displays . As long as he manages to maintain his current mindset and demeanor as his fame and savings account continue to grow exponentially, the future looks very bright indeed for Alex Iwobi.