Siasia threatens to resign as Dream Team coach in Brazil 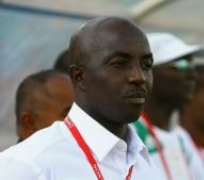 The Coach of Nigeria's Olympics team, Samson Siasia, has threatened to resign following unending ill-treatment from both the Nigerian Minister of Sports, Solomon Dalung, and his employer the Nigeria Football Federation.

Despite the horrendous conditions in the Nigerian team, the Siasia-tutored Under 23 team have been superlative in the games they played so far, beating Japan 5-4 and Sweden 1-0 to become the first team to qualify for the quarter finals in the tournament.

He is said to be bitter about the treatment being meted out to him by the Minister of Youth and Sport, Solomon Dalung, and his employer, the Nigeria Football Federation.

The height of it was said to be the undue interference of Dalung in the running of the team.

The latest of such interference was said to be Dalung's insistence on choosing a captain for the team.

Despite the fact that the team had a captain before Dalung visited their last training camp before the Games in Brazil in Atalnta, United States of America, the Minister was said to have foisted John Mikel Obi as captain.

This was said not to have gone down well with Siasia and most members of the team.

Obi was a last minute call up to the team as three of the overaged players for the team.

But to make matters worse for Siasia, Dalung now deals only with Obi when he needs to pass information to the team.

The Eagle Online was told that anytime Dalung decides to speak with the team, he calls Obi on the phone and the message is subsequently passed onto Siasia and the other players through him.

Siasia was said to have wanted to quit after the team defeated Japan and instead of the Minister calling him, he called Obi and told him to relay the message to the coach, The Eagle Online was told.

However, the players prevailed on him to hang on until after the team must have qualified for the quarter-final of the Games, saying this would strengthen his hands when making his point.

With the qualification of the team for the quarter-final, Siasia is said to be seriously considering throwing in the towel.

The players are equally not satisfied with the development.

The team had been in crisis even before the Games when it was abandoned in Atlanta.

It arrived in Brazil less than seven hours to its first match against Japan.

When the attention of Dalung was called to the situation of the Dream Team VI in Atlanta, he said he was not aware they were in the US.

The NFF also did not help matters, making the team to spend 39 days in the US instead of the scheduled 18 days.

Siasia is also being owed salaries by the NFF.
A source in the camp told The Eagle Online: “Don't be surprised if by the time the victory dance is over, the coach sends in his resignation letter.

“He has had it to the hilt and is no longer willing to continue.”

A player in the camp also confirmed the development.

He said: “Even Mikel that the Minister is always talking to is not pleased with the development.

“If not that Mikel is quite humble and able to manage the situation, the crisis in the team would have become an open issue.

“But each time, he goes back to the coach to pledge his loyalty and explain to him that he was not in support of the Minister's actions.”