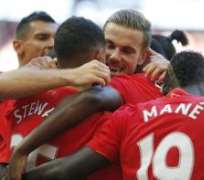 Liverpool thrashed Barcelona 4-0 Saturday in the International Champions Cup friendly, providing a boost for manager Juergen Klopp as he focuses on domestic success in his first full season in charge.

With little at stake for either side, Liverpool dominated against a Barcelona team containing Lionel Messi and Luis Suarez, who was facing his former club for the first time.

In front of almost 90,000 fans at Wembley Stadium, Liverpool went ahead after a well-worked move in the 15th minute saw Sadio Mane score his first goal after his transfer from Southampton in June for a reported 34 million pounds ($45 million).

Divock Origi scored two goals after the break, with one from on-loan midfielder Marko Grujic.

Klopp already has some injury concerns, however. Striker Daniel Sturridge (hip) was missing from the starting line-up, while James Milner (heel) limped off injured before halftime.

Liverpool finished eighth in the Premier League and will not play in Europe this season.