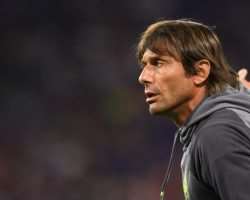 Conte hinted Oscar could be given a stay of execution

After seeing Oscar come off the bench to score twice against Milan, there was the merest of hints from Conte that the Brazilian might have won himself a stay of execution.

But Oscar’s body language was that of a player who might already have been told that he will be packed off to Inter Milan if the Italians can come up with £30million or an argument to convince Chelsea that he should be allowed to leave on loan.

He didn’t even raise a smile after hitting the net – although he would have been happy with the tribute his manager paid afterwards.

Conte said: “Oscar is an important player and the season when Chelsea won the title he was fantastic.

“Last season was bad for all the players – not just for Oscar. He is a good player with a great talent but he can improve a lot. Oscar scored twice after coming off the bench

“I see a good attitude and a good will and these 14 days have been important to me because I am judging the players during the training sessions so I can try to find the right solution.

“I think this match told me a lot about this and about the players who we will keep and the players we can send out on loan or sell.”

Conte added: “This game was important because my ideas are clearer than before.

“Now we go back to London and it’s important for me to talk and take decisions about all the players.

“We have 30 players and four goalkeepers. Now we have one game against Werder Bremen and then we must take a decision – and I hope to take the best decision for the club.

“My ideas are very clear now, but first I must talk about these ideas with the club.” Conte has decisions to make over a number of players

It was a handy work-out for Chelsea, with Costa playing for an hour after recovering from a back injury, N’Golo Kante handed a debut as a substitute and Eden Hazard also getting some valuable minutes on the pitch.

And Conte will be encouraged that his team grew stronger as the contest against Vincenzo Montella’s aggressive side went on.

Milan seemed determined to show that cynical Italian defending is still alive and quite literally kicking.

Both Bertrand Traore and Costa had their shirts ripped off their backs in the opening exchanges.

And Hazard was given some particularly brutal treatment when he came on.

The showpiece game opened the magnificent US Bank Stadium – and the billion-dollar indoor arena was full to its 64,000 capacity. It meant the Blues have been watched by more than 220,000 fans in their three-games tour of the States.

Traore struck in the 24 minute after Ola Aina’s long throw into the feet of Nemanja Matic caught the Italians out.

Matic had time and space to find the overlapping Victor Moses and although his low shot was saved by Gianluigi Donnarumma, the lurking Traore stooped to head home the rebound.

But Milan were level 14 minutes later when Giacomo Bonaventura beat Thibaut Courtois with a perfect free kick from 25 yards.

It was Oscar’s introduction on the hour that was to be decisive.

The Brazilian beat Donnarumma high and handsomely from the penalty spot 20 minutes from time after Hazard’s cross was handled by Andrea Poli.

And he made the game safe in the 88 minute when he swept an deadly finish into the far corner from Cuadrado’s clever pass.