Zlatan Ibrahimovic: Man Utd have 'something big on the go' 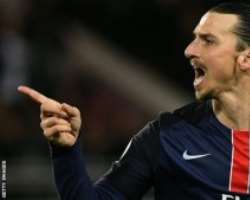 Zlatan Ibrahimovic believes Manchester United have “something big on the go” after scoring a bicycle kick on his first Red Devils appearance.

The Turkish side bossed the remainder of the half and led thanks to goals from Sinan Gumus and Bruma.

But a much-changed United side turned the match around through Wayne Rooney (two), Marouane Fellaini and Juan Mata.

And Swedish striker Ibrahimovic believes the future is bright for the Red Devils, who continue to be linked with a £100m move for Juventus midfielder Paul Pogba.

“I’m going to help the team as much as I can and do what I’m good at, creating chances and scoring goals.”

Manager Jose Mourinho used 22 players and will leave Gothenburg with as many questions as answers as he ponders his starting XI for next Sunday’s Community Shield, which sees his FA Cup winners face Premier League champions Leicester at Wembley.

Ibrahimovic led the line in the first half, with Rooney behind him and Anthony Martial and Henrikh Mkhitaryan either side.

Rooney equalised with a clean volley from another Valencia cross before Rashford won a penalty with an individual run from near halfway, and captain Rooney converted.

Valencia then made another goal as Fellaini drifted a header into the corner and Mata – who was sold by Mourinho at Chelsea – collected Michael Carrick’s clever ball to slide in.

World Cup winner Bastian Schweinsteiger – one of nine players reportedly told they can leave the club – did not feature.

Manchester United manager Jose Mourinho:
“If the players were not in my plans I would not give them one single minute, I would not keep them in my squad.

“We have 38 matches in the Premier League, we have the possibility of 15 matches in the Europa League, plus domestic cups, we are going to play 60 matches. So with 60 matches we cannot do it with 11 players.