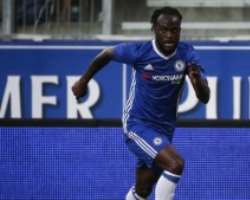 It's probably fair to say that Victor Moses has had one of the stranger Chelsea careers of recent times.

Signed in 2012 — the same summer as Eden Hazard and Oscar — he made over 40 appearances in his very first season, finding plenty of playing time even with the likes of the aforementioned two as well as Juan Mata gobbling up the minutes. Scoring a career-high ten goals, Moses looked ready to build on his debut campaign as Jose Mourinho arrived back on the scene. Alas, it was not meant to be. Moses has made just 1 semi-competitive appearance for the Blues since, in last season's Community Shield.

Three years and three different Premier League loans later, Moses is once again back with Chelsea and once again impressing in pre-season. Perhaps one crucial difference from the last few go-arounds is that he's getting to play the style with which he impressed at Wigan, which prompted Chelsea to sign him in the first place.

“That is my position really, staying out wide and most of the time going into one v one situations which I am good at. It is similar to the kind of game I was playing at Wigan and I have really enjoyed the two games. As a winger, you want to get at defenders and make it hard for them. Instead of them going forwards, they have to defend against you.”

With Conte's strategies involving plenty of wing-play, Moses might just be able to stick around. There are limited spaces and plenty of bodies to fill it — even with the emphasis on width, the likes of Hazard, Willian, Pedro, Kenedy, Moses, Cuadrado are vying for basically two spots — but Moses has had a head-start on most. (And, as pointed out in the comments, he is home-grown as well.)

“The work has not really changed from Austria. We just need to work hard to make sure we are a lot fitter come the start of the season. Everyone is looking sharp, everyone wants to do the work and we are excited; we have got a new manager and we all just want to work as hard as we can.”

“I came back to start my pre-season early with the group of players who had been on loan last season, which helped as well, but to be honest, I just want to enjoy my football. I want the fans to be able to recognise I am doing something good for the club but at the same time I want to work hard for the team and make sure we win games.”

“We have played two games so far so we still need to get our fitness up and we have a game coming up against Liverpool which is going to be good for us.”

Moses, sporting the number 15 on his back this pre-season, signed a new contract last summer, tying him to the club until 2019. Hopefully we'll get to actually see the 25-year-old in a Blue shirt at some point before then!

“I am lucky doing my pre-season here. With a new manager I want to show my talent and that I am willing to play for the team…”