I will snub Chelsea interest to stay at Boca: Carlos Tevez 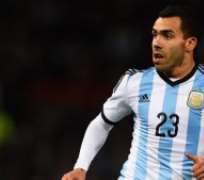 Carlos Tevez claims he will snub interest from Chelsea this summer to see out his career with Boca Juniors.

The Argentina forward says Chelsea and Italian side Napoli want to bring him back to Europe, where he spent nine years with West Ham, both Manchester clubs and Antonio Conte’s Juventus.

Tevez returned to Buenos Aires and first club Boca in 2015, and the message to interested European clubs is clear: ‘I’m not coming back’.

“I’m fine at Boca,” said the 32, year-old, quoted in Italy’s Corriere dello Sport. “Indeed my idea, my dream is to finish my career as a player in this wonderful club.

“Europe? Yes, it’s true Napoli and Chelsea seek me, but I repeat what I said before. My desire is to stay at Boca until I retire.”

West Ham co-chairman David Sullivan revealed earlier this month he had explored the possibility of re-signing Tevez, claiming the deal broke down over the player’s wage demands.

Tevez became a cult hero in east London when he helped save the club from relegation in 2007, and Premier League successes with United and City followed.

He left for Juve in 2013 when new Chelsea boss Conte was in charge and went on to win back-to-back Serie A titles.