Fabregas wants Conte to fail at Euro, for good of Chelsea 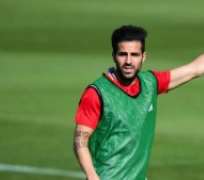 Before this Euro 2016 tournament is out, incoming Chelsea coach Antonio Conte just might face all the Chelsea players who are playing in it.  He’s already met, and beat, Eden Hazard and Thibaut Courtois in the group stage, will meet Cesc Fàbregas, Pedro, and César Azpilicueta on Monday, and could still meet Gary Cahill in a potential semifinal match-up.

But Italy’s path through the knockout rounds is probably the toughest.  They face Spain, then probably Germany, then either France (probably) or England, and all that before the actual final, should they get that far.  And if Cesc Fàbregas gets his way, Conte will be out long before then.

“[I’ve spoken with Conte] very little, but he left a great impression on me. He is a great coach and a winner. He told me what he wants to do at Chelsea but that will remain private. I really want to work with him but I want him to focus on Chelsea as quickly as possible. I hope that will start on Tuesday.”

-Cesc Fàbregas; source:  Gazzetta World
Cheeky bugger.
Cesc, who’s been a key midfielder for Spain so far, probably does have it backwards though.  For the best of Chelsea, it’s the players who need to go home first, to begin their holidays and return for preseason in a few weeks well rested and raring to go.

And now for something not so completely different, Fàbregas nutmegging Casillas.