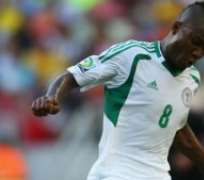 Goals from Brown Ideye and Kelechi Iheanacho helped Nigeria to a 3-1 friendly win over Luxembourg on Tuesday.

Iheanacho scored a late winner to give the Super Eagles victory over Mali on Friday, ending a run of four games without a win across all competitions.

And interim boss Salisu Yusuf, who is vying to secure the post on a permanent basis, gave his chances another boost thanks to Ideye’s finish – his first international goal since 2013 – and the Manchester City striker’s simple finish.

But the biggest cheer of the match came in the 89th minute, when Vincent Thill – who became Luxembourg’s youngest international at 16 years and 50 days in March – capitalised on an error from Kenneth Omeruo to score a consolation.

Odion Ighalo made the win safe in the dying moments, however, scoring his side’s third after Iheanacho’s brilliant run.

Nigeria, who made six changes to the starting line-up from the Mali win, always looked to be in control of proceedings and took the lead 10 minutes before the break. Anthony Moris saved Ogenyi Onazi’s fierce strike, but Ideye was on hand to steer home the rebound from inside the six-yard box.

Both sides made a number of changes in the second period, with Luxembourg handing a second cap to 16-year-old Thill, but Nigeria made sure there was no threat of a shock comeback with 20 minutes to play.

Moris’s poor clearance was pounced upon by Moses Simon, and he squared across the box from the left to give Iheanacho an easy finish.

Substitute Ighalo had a third goal ruled out late on and Luxembourg gave themselves hope of a result when Thill picked up the ball after Omeruo’s slip before finishing with aplomb.

But Ighalo would not be denied in injury time, when Iheanacho’s superb run set him up to steer home Nigeria’s third.