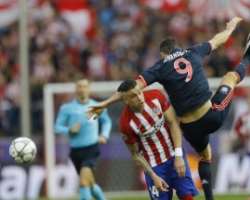 An early goal by youngster Saul Niguez gave Atletico Madrid a gritty 1-0 victory over Bayern Munich in the first leg of their Champions League semifinal on Wednesday.

The 21-year-old Niguez cleared three defenders before entering the area and hitting a low, well-placed shot into the far corner in the 11th minute. Diego Simeone’s tough defense then took over and Atletico held on for an important victory at the Vicente Calderon Stadium.

A draw next week in Germany will be enough for Simeone’s side to reach the final for the second time in the last three seasons.

”It’s still wide open,” Simeone said. ”The return game should be just as exciting for everyone watching it. It will be a difficult challenge against a very strong team.”

Pep Guardiola’s Bayern, trying to reach the final for the first time since winning the title in 2013, came close to equalizing with a long-range shot by David Alaba in the 54th, but the ball struck the crossbar with Atletico goalkeeper Jan Oblak already beaten.

Striker Fernando Torres could have increased Atletico’s advantage in the 75th but he also struck the woodwork after a breakaway.

”It was a fantastic night and I’m happy for all Atletico supporters,” Torres said. ”We’ve got what we wanted, which was to get the scoreline in our favor ahead of the second leg.”

Real Madrid and Manchester City drew 0-0 in their first-leg match in England on Tuesday.

Wednesday’s draw ended Bayern’s 11-game unbeaten streak, and kept the German side winless in its last eight knockout games away from home.

”We had a slow start,” Guardiola said. ”We have to play at a different pace in the second leg. Their goal was brilliant, but it came from our mistake – we kept standing off him. I’m not happy with how we played. If we let them run and win fouls, it will be hard. It’s not a good result.”

Bayern, in the semis for the fifth straight year, has been eliminated by Spanish clubs at this stage of the Champions League the last two seasons – to Real Madrid in 2014 and Barcelona in 2015. It was the team’s ninth loss in 13 trips to Spain.

Guardiola’s team controlled possession but was not able to break through the tight defense set up by Simeone.

Bayern was able to threaten more in the second half and created some clear scoring chances, but couldn’t capitalize on any of them. In addition to Alaba’s shot onto the crossbar, Bayern also came close to scoring with a header by Javi Martinez in the 56th and a powerful shot by Arturo Vidal in the 73rd.

Both attempts required difficult saves by Oblak, who has kept a clean sheet in five straight games.

”We did very well in the second half,” Alaba said. ”We created a lot of chances, but in the end it wasn’t enough.”

Atletico also hadn’t created much when Niguez scored to ignite the crowd of more than 50,000 fans at the Calderon. The midfielder left three defenders behind outside the area before moving into the box and clearing another one before calmly firing a left-foot shot past Bayern goalkeeper Manuel Neuer. The ball struck the far post before going in.

”It was definitely the most important goal of my career and probably the most beautiful one as well,” Niguez said.

France striker Antoine Griezmann, who scored twice when Atletico eliminated Barcelona in the quarterfinals, almost increased the lead from close range in the 30th – but Neuer made a great save with his left foot.

It was Atletico’s 25th win in 30 European games at the Vicente Calderon. Simeone’s team hasn’t lost at home in 10 straight games, winning eight. Atletico has kept a clean sheet in 14 of its last 16 Champions League games at home.

It was the teams’ first meeting since the 1974 European final, when Bayern won the first of its five titles. Atletico has never won the Champions League.