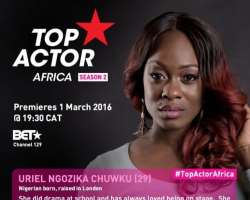 Lagos| Nigeria: Uriel Oputa has become the first Nigerian contestant to be evicted from the ongoing BET Top Actor Africa after 7 weeks of intense competition.

The episode also featured a surprise appearance from Jay Ellis (BET’s The Game), who served as a mentor to the contestants and guest judge.

Contestants were once again handed a curve ball as Jesse and Ifeanyi’s roles got switched at the last minute which sent them scrambling.

BET Top Actor Africa Season 2 Episode two airs every Tuesday at 6.30pm WAT on BET Channel 129. For all the drama on Top Actor Africa, visit www.betafrica.tv , like us on Facebook at www.facebook.com/BETinAfrica or join the conversation about the channel on Twitter and Instagram @BET_Africa using the hashtag #TopActorAfrica.