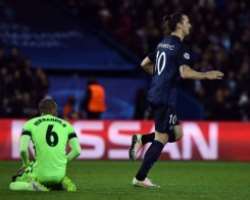 Although Fernando’s first-half blunder opened the door for a PSG comeback, Manchester City will head back to England with a 2-2 draw from the first leg of their Champions League quarter-final clash.

The Brazilian’s lack of urgency allowed the French champions to level the score through Zlatan Ibrahimovic, but luckily compatriot Fernandinho bundled home an equaliser in the 72nd minute to give the Premier League side reason to believe they can move on ahead of next week’s return leg on Tuesday.

PSG’s night didn’t start well as their Swedish star saw a penalty denied by Joe Hart. The English No.1 took his time before taking his position on the goal-line, and it worked as he dove to stop the Swede.

It proved crucial as Manchester City took the lead despite the home side having the bulk of possession. Fernandinho picked out Kevin De Bruyne on the break, and the Belgian made no mistake in firing past Kevin Trapp.

The advantage only last three minutes as the English side conceded in comical fashion. Hart played a short goal kick to Fernando, but the Brazilian dwelled on the ball a fraction too long.

As a result his attempted pass clipped the outstretched foot of Ibrahimovic and into the back of the net, to the amazement of all in attendance.

PSG turned the tie around after the restart as they took the lead in the 59th minute. After scoring against Chelsea last round, Adrien Rabiot netted against another English opponent as he fired home from close range after Hart could only parry Edinson Cavani’s header.

However the topsy turvy contest saw another fortuitous strike, though this time it went in City’s favour. Bacary Sagna’s cross came off Thiago Silva and into the path of Fernandinho. The Brazilian’s weak effort glanced off the PSG defender but managed to trickle in to level the score.

The two goals away from home means Manuel Pellegrini’s side are favourites to progress through to the semi-finals, though they’ll certainly be weary of a PSG squad that netted twice at Stamford Bridge against Chelsea last round.